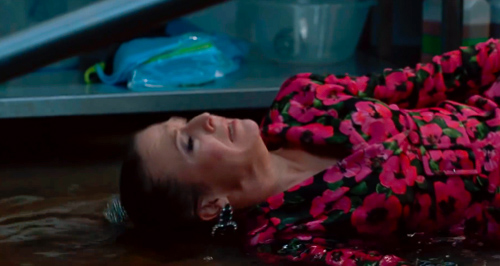 Eastenders spoilers reveal things always get worse before they get better. Michael “Mick” Carter (Danny Dyer) signs divorce papers and Linda Carter (Kellie Bright) celebrates by boozing it up and humiliating him. However, the 35th-anniversary boat tragedy could bring them back together when she nearly drowns and it is Mick who saves her life. Could the end of one life mean a new beginning for two others?

Divorce Drama and Endless Embarrassment – Linda’s drinking has caused so much conflict and chaos for the entire family. Despite Mick trying to protect her, Linda lashed out both verbally and physically. She continued to pour alcohol down her throat. She put their child in danger and so much more.

If that weren’t enough, Mick signed the divorce papers, which leads Linda to celebrate with even more booze. Plus, she airs their dirty laundry to everyone on the boat and humiliates Mick.

Shirley Carter’s Softer Approach – Eastenders spoilers indicate Shirley Carter (Linda Henry) has used tough love on Linda. However, those efforts have failed. Even after the divorce papers are signed, Shirley decides to make one more attempt to get through to Linda. She uses a softer approach and tries to reason with the woman, telling her that she still loves Mick.

Now, these two haven’t always gotten along but Shirley knows how much Mick loves Linda.

Eastenders Spoilers: Linda Carter Nearly Drowns – If you look closely at the 35th-anniversary trailer, there is a scene that shows Linda is inside the boat in what appears to be a lower deck. It’s flooded and she is underwater. Her eyes are closed and it almost appears she might be unconscious. Our best guesses are she either knocked her head falling over and landed in the water or perhaps she passed out drunk.

Mick Carter Saves a Life and His Marriage? – When Linda is underwater, Mick comes to the rescue. He grabs her underneath both arms and pulls Linda up so her head is above water. However, her eyes still aren’t opening. Can he revive her or is she a goner?

Typical soap storylines would play this out as Mick saving her life and Linda realizing how much she loves her husband. Perhaps this is just wishful thinking because they do have a lot of issues. However, the Carters reconciling and rebuilding their tattered relationship would make a great ending. Especially since the week is already filled with so much turmoil and tragedy.