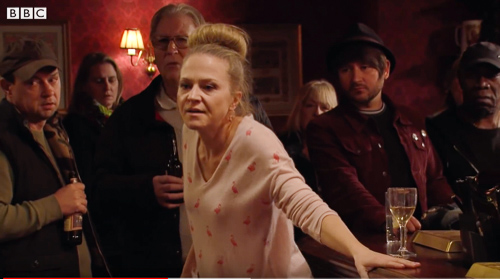 Eastenders spoilers reveal the Carter family is going to endure more turmoil and fans aren’t sure if they can get their marriage back. In scenes that air during the week of February 17, Michael “Mick” Carter (Danny Dyer) signs divorce papers. Once he does, Linda Carter (Kellie Bright) celebrates by guzzling more booze. Then, she humiliates the man who tried to protect her by exposing all of their secrets. Will she regret it?

The Last Straw For Mick Carter – Viewers have watched for the past few months as Linda’s drinking has escalated and landed her in some dangerous situations. Despite everything she has put them through, Mick has done his best to protect her and their son, Ollie Carter (Harry Farr).

However, he reached his breaking point after Linda chased the social worker and revealed a big secret. She told Loretta Perkins (Sarah Finigan) about how she fell asleep and the stove was left on, which nearly caused a fire. But she kept insisting that the little boy was never in any danger.

Linda would soon discover that Mick never told the social worker that information. Her actions were caused by drinking gin-spiked tea and now the Carters might end up losing custody of their young son.

Carter Divorce Papers Signed – Eastenders spoilers reveal divorce papers are drawn up. Accepting that Linda can’t quit drinking and will continue destroying their family, he signs the divorce papers. It was previously teased by Bright that the only way Linda would get sober is by losing her family. It seems that day has arrived, but she’s not done causing conflict and chaos.

Eastenders Spoilers: Linda Carter’s Cruel Celebration – The constant embarrassment Linda’s alcohol use has caused is not enough. On The Vic’s boat party, Linda continues guzzling booze and airs all of their dirty laundry. She humiliates the man who tried to protect her. To top it off, after he signs the divorce papers, Linda has a cruel celebration as he cheerfully acts like she’s happy. However, viewers know she is really hurting and suffering inside.

Future Regret and Fatal Consequences – Eastenders spoilers suggest once Linda sobers up, she will regret her behavior. However, there are other events that will overshadow her drinking. Keanu Taylor (Danny Walters), Phil Mitchell (Steve McFadden) and Ben Mitchell (Max Bowden) end up on the boat. There is chaos and Linda ends up overboard, but it’s unclear whether she’s pushed or falls in the water on her own.

Plus, there is one confirmed death, but who could meet their demise? It is supposed to be a shocking death that takes place during the 35th-anniversary episode. Will Linda end up losing her life or does the murder have nothing to do with her? Fans will have to keep watching the soap to see what happens next.