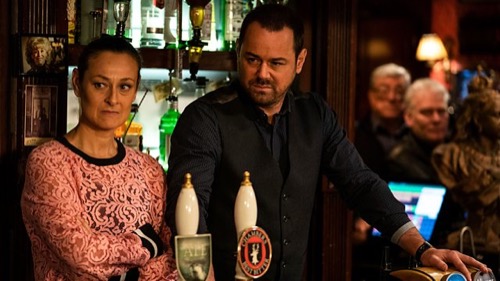 Eastenders spoilers for the week of February 10 reveal Callum Highway (Tony Clay) is being watched and then receives a shocking visitor. Meanwhile, the Carter family tries to put on a front that they are one big happy family when the social worker arrives. Kat Slater (Jessie Wallace) gets annoyed, a mother and son reconcile and much more is in store for the upcoming week!

Monday, Feb. 10: Shocking Visitor, Social Worker Visit and Spiked Tea – As Callum is getting ready for his assessment, he is unaware that someone is watching him. Then, he ends up with a huge shock by an unexpected visitor. Rebecca “Bex” Fowler (Jasmine Armfield) will move out. Also, Leo King (Leo Cameron) continues hanging out in his attic to spy on Whitney Dean (Shona McGarty).

When it comes to the Carters, they get a visit from a social worker and try to put on a united front. However, Linda Carter (Kellie Bright) is under a tremendous amount of stress and we all know what that means. So, she pours some gin into her tea. Later, she sees Micahel “Mick” Carter (Danny Dyer) and Loretta Perkins (Sarah Finigan) talking in private. Assuming it’s about her, she gets furious.

Tuesday, Feb. 11: Drunken Confrontation and a Reconciliation – Eastenders spoilers for Tuesday reveal Linda confronts her husband for talking to Loretta about her. While drunk, she ends up catching up with the social worker. However, could she ruin everything in her alcohol-fueled rage?

Kat will get annoyed with Whitney, but Kush Kazemi (Davood Ghadami) will give his support. Then, Kat explains that she has a letter from Tony King (formerly Chris Coghill), she has no clue that Leo is up in the attic listening to every word.

As for some good news, Sharon Mitchell (Letitia Dean) and her son will finally reconcile.

Eastenders Spoilers for Thursday, Feb. 13: Regret and a Shocking Announcement – On Thursday Mick to have some regrets after lashing out at Linda and telling her their son would be better off without her. Before he can apologize, though, she storms out. Mick isn’t the only one worried, though. Sharon is also concerned about the alcoholic, who makes a shocking announcement in an attempt to protect herself.

Friday, Feb. 14: Confession, Danger and a Horrifying Discovery – Eastenders spoilers confirm Whitney will confess to the police that Tony’s letter is missing. Then, she makes a horrifying discovery when she finds Leo in her room. This puts her in danger and Leo wants revenge. It is teased that one of them will have blood on their hands, but which one will it be?

Finally, Mick will have some things to think about after hearing Jean Slater (Gillian Wright) have a conversation. It causes him to get serious about repairing his marriage.