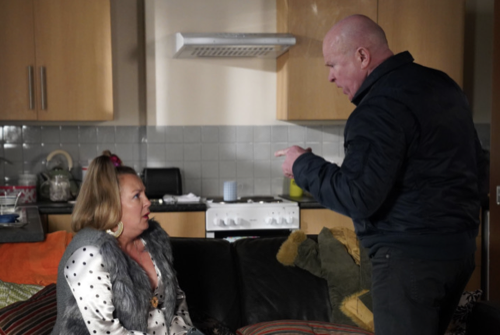 Eastenders spoilers for the week of February 17 confirm the soap’s 35th-anniversary episodes are finally arriving. While many scenes take place during a boat party, things definitely won’t end with a celebration. It is teased to expect humiliation, revenge, and chaos. Plus, at least one person will die by the end of the week.

Monday, February 17: Humiliation, Clashes, and Paranoia – At the beginning of the week, the day of the boat party arrives. However, not everyone is in the mood to celebrate. One of these is Michael “Mick” Carter (Danny Dyer), who finally signed divorce papers. He is struggling while Linda Carter (Kellie Bright) is in obnoxiously high spirits.

However, her joy will be overshadowed by Shirley Carter (Linda Henry) and the two women end up clashing over what has taken place recently. Instead of doing the tough love act, Shirley changes it up and tries to reason with Linda. She attempts to make her remember how much she loves Mick. However, she gets distracted and paranoid when she sees Mick with Whitney Dean (Shona McGarty).

Eastenders Spoilers: Tuesday, February 18: Cyberbullying and Fighting For One’s Life – On Tuesday’s episode, Bobby Beale (Clay Milner Russell) is recognized from the cyberbullying incidents. This leads to a situation in which he is harassed along with Iqra Ahmed (Priya Davdra) and Habiba Ahmed (Rukku Nahar). They hurl racial slurs at the group but it quickly turns from verbal to physical. Bobby is left fighting for his life and requires emergency surgery.

Fans can also expect Ian Beale (Adam Woodyatt) to read a text message which causes him to seek revenge. He heads to the Queen Vic’s boat party, where things will likely continue to spiral out of control for many different characters.

Thursday, February 20: Threats, Revenge, and Fury – Eastenders spoilers reveal Ben Mitchell (Max Bowden) reaches his breaking point as he tries to stop Keanu Taylor (Danny Walters) from killing Callum Highway (Tony Clay). Later, he runs into Sharon Mitchell (Letitia Dean), who has plans to leave town, but Ben intercepts them. Suddenly, she goes into labor and it’s the worst possible time for her baby to come into the world.

Batten down the hatches, we’re in for a bumpy ride.
EastEnders. Next Week. @BBCOne.#Trailer #EastEnders #EastEnders35 pic.twitter.com/f8nqGdMEac

Meanwhile, Phil Mitchell (Steve McFadden) has returned and is on his own mission to find Keanu. He threatens Karen Taylor (Lorraine Stanley) and demands to know Keanu’s whereabouts.

Eventually, Phil and Ben’s quest for revenge lands them on the boat and they finally face off with Keanu. It is teased to be a final showdown, but who will end up victorious and which man will die?

Eastenders Spoilers: Friday, February 21: – By the end of the week, lives will be shattered and one person will be dead. The question remains, who ends up losing their lives and which character is responsible?