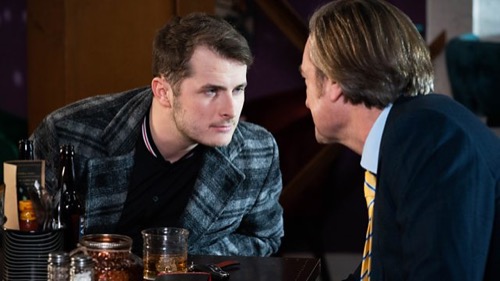 Eastenders spoilers for the week of March 16 reveal Gray Atkins (Toby-Alexander Smith) makes a discovery that could help Whitney Dean’s (Shona McGarty) case. One character will make a dodgy deal when someone returns. Fans can also expect one young couple to go through a major rough patch and things will get worse. Plus, Sharon Mitchell (Letitia Dean) makes a heartbreaking decision.

Monday, March 16: Dodgy Deal and Rocky Relationships – Eastenders spoilers for Monday reveal Danny Hardcastle (Paul Usher) returns. As fans may recall, he is one of Ben Mitchell’s (Max Bowden) associates. He used to launder money in Spain until the businesses that he used were liquidated. Well, Danny is returning and has a proposition for Ben. However, will Ben end up regretting it, especially since he keeps up appearances by pretending to hear what he is saying?

Eastenders Spoilers For Tuesday, March 17: Sharon Mitchell’s Decision – On Tuesday’s episode, expect Sharon to make a major decision. While it is not revealed what that decision is regarding, it seems that everything is proving to be too much for her. Especially after she sees Dennis Rickman’s (Bleu Landau) body.

Eastenders Spoilers: Gray’s Discovery Could Help Him Win Whitney’s Case – But There Might Be a Catch https://t.co/tlPAYLTdhE

Fans should also expect Gray to see what he did to his wife during a fit of rage. She has injuries and while Chantelle Atkins (Jessica Plummer) tried to hide them, he will finally see what he has done. He promises it won’t happen again, but this isn’t the first time and probably won’t be the last.

Meanwhile, Ben finds out that his surgery won’t be for several more weeks. He also has to consider the operation comes with serious risks and complications.

Thursday, March 19: Whitney Dean’s Fate and Callum Highway Threatened – Eastenders spoilers for Thursday reveal Whitney will finally learn her fate. Will she be released from jail or be forced to stay behind bars? Plus, Danny threatens Callum “Halfway” Highway (Tony Clay) when he discovers his police connections.

Meanwhile, Linda Carter (Kellie Bright) will try to apologize to a school parent for her previous behavior. Instead of it being accepted, she is publicly bashed and humiliated. However, there is a rainbow to this story. Let’s just hope it doesn’t drive her back to the bottle.

Eastenders Spoilers For Friday, March 20: Callum Highway Devastated – Tiffany is trying to be a good wife to Keegan, but it seems the young married couple is facing more complications with their relationship. Tiffany asks Callum for advice on how to handle things. As for Callum, he will be devastated after being told that Ben left the Prince Albert with another man. But it might not be what it seems.