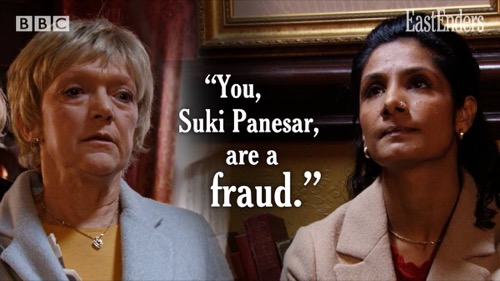 Eastenders spoilers reveal Jean Slater (Gillian Wright) figured out that Suki Panesar (Balvinder Sopal) doesn’t have cancer after all. Initially, her family reacted to Jean’s accusation with disgust. However, there were a few that wondered if it could be true. Now that the truth is out, Suki has fired back with a threat for Jean, who actually did have cancer and is currently in remission. Could she end up homeless?

Jean Slater’s Suspicions – It has been teased for a few weeks that Jean was becoming suspicious of Suki. The two women tried to talk about battling cancer. While Jean was quite open about it, Suki didn’t really offer any of her own experiences. She just wanted to hear about Jean’s journey and later, would even use Jean’s own words as her own. Then, things got even more curious when Jean began adding things up, especially when it came to Suki’s medication.

Now, fans recall Jean making a promise to Daniel Cook (Adrian Edmondson) on the park bench. While sitting there, he had passed away and she vowed that she would be more like the real Jean. As viewers know, she can be a bit of a spitfire. While that can be a good thing, it might lead to some consequences when she confronts the wrong person.

Suki Panesar’s Cancer Scam – Eastenders spoilers confirm that Suki doesn’t have cancer at all. In fact, Jean decided to use her newfound spitfireness to expose Suki in front of her entire family. Many publicly expressed disgust at the accusation that the Panesar matriarch was faking cancer. However, privately, a few members of her family wondered if it could be true.

Something tells us this won’t be a piece of cake. #EastEnders pic.twitter.com/9eiDqSABNO

Eastenders Spoilers: Truth Could Have Consequences – The truth about Suki’s cancer scam has finally been exposed, thanks to Jean not backing down. However, she better be prepared for Suki to dole out revenge. In fact, she outright threatens Jean and if she makes good on that threat, the entire Slater family could find themselves evicted.

Will the Slater Family End Up Homeless? – This isn’t the first time the Slater family has faced the possibility of losing their home. When the Panesars first came to town and were the new landlords, they increased the rent. The family was already barely making it and it caused some tension between the characters.

In fact, at one point, one of the Panesar brothers cut off the electricity and it was during wintertime. Not only was there an elderly cancer patient in the home, but the kids were freezing.

Eventually, things were made right and despite Suki’s threat, we have full confidence that the Panesar brothers won’t allow the matriarch to evict Jean Slater’s family. But only time will tell what else the cancer scammer will come up with to get payback.