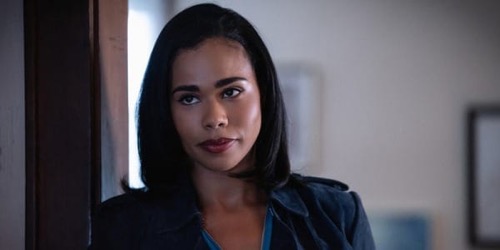 Tonight on CBS FBI airs with an all-new Tuesday, April 28, 2020, season 1 episode 13, “Grudge” and we have your FBI recap below. In tonight’s FBI season 1 episode 13 as per the CBS synopsis, “The team searches for a cyberstalker who will stop at nothing to get revenge on those he believes wronged him; someone from Hana’s past offers her help on the case, but at a price she’s not willing to pay.”

CID gave the team a tough case. There were searching for a John Doe. Their perp hasn’t been identified because he was a cyber stalker and he has never shown his face. This John Doe has been stalking Chris Thompson. He stalks him under the fictitious name of “Hunting Chris”. He’s been sending Chris text messages and he escalated into killing Chris’s friend and attempting to kidnap Chris himself. Chris managed to fight off his would-be kidnapper. This John Doe hadn’t wanted to kill Chris. He just wanted to grab and so the team believes they were dealing with an “intimacy stalker”.

They believed this John Doe wants the connection to Chris. Chris has tried changing number and password. He’s even tried moving. Nothing he does seems to deter his stalker and his stalker has sent messages to Chris saying he will never stop. This John Doe has implied that Chris did him wrong. Chris doesn’t know what he did to provoke this stalker. He’s tried apologizing and it hasn’t worked. This stalker has escalated. He has threatened Chris and his pregnant wife Carly and so the FBI was brought in. They had to hunt for a faceless man. The first thing they did was try to track down the car used in the attempted kidnap and it led back to an innocent man.

The car owner hadn’t been involved. He had advertised his car online and someone used that link to hack his camera as well as his camera. The stalker recorded footage of the man watching porn and he blackmailed the man with it. He threatened to send it to the man’s wife. The stalker even threatened to send it to his relatives. He threatened the car owner into leaving his van in an abandoned lot and that’s how the stalker got his hands on it. The van was then used in the attempted kidnap which turned into murder when Chris’s friend tried to help him. The FBI managed to later locate this van.

They opened it up. But what they found inside was disturbing. Their stalker had turned the van into a torture chamber. He had chains all lined up. He had bone cutters. The stalker also had a head cage for Chris that was custom-made. This meant the stalker was either a craftsman or specially ordered the cage. The head cage was only thing that was special. Everything else was random things he could have picked up if not made for a bondage store and so the team checked providers. They eventually found someone the person who made the head cage although he hadn’t wanted to be helpful at first and so the team had to persuade whim with possible charges.

They threatened to arrest him. The craftsman didn’t want to go to jail and so he told them about a special head cage he made for a client. He then showed them a picture he took of the client which included the stalker’s car. The team finally had a lead on their stalker and that meant they didn’t have to use Wellman’s help. Wellman was a hacker. He was also formerly an FBI contractor and he lost his job after he began stalking Special Agent Hana Gibson. She had gone on one date with Wellman. She hadn’t felt a connection with him and so when she tried to tell him she was no longer interested – he began harassing her. He stalked her to the point where he was fired and he’s never relented.

Wellman leaves her alone for a while. He then pops up after a few months and he starts in on her again. Only this time Wellman told her he could help with the case. He was a very skilled hacker and he believed he was smarter than their stalker. Wellman tried to insinuate himself into Hana’s life and she pushed him away with LaCroix’s help. They decided to investigate their way and that’s what led them to find the stalker. They identified him as David Fallon. They then asked Chris and his wife if they ever met him and they had. They said they interrupted his conversation with their OBGYN.

Carly Thompson had thought she was having a miscarriage. She was rushed into the doctor’s office and that’s what Fallon is holding against them. Fallon had kept a record of everyone who has ever offended him. He wrote what they what did, what they looked like, and he even added dates. He was thin-skinned. Fallon got upset when someone cut him off on the line. He wrote down that someone accidentally spilled his coffee and didn’t say sorry. Fallon was a grievance collector. He would also get vengeance. Fallon would slash tires and he poisoned a dog once. What he would never do is confront these people face to face.

Fallon was a coward. He might have gotten his father. His father had gotten into an argument with a neighbor and he had been slapped in full view of his young son. Fallon Senior hadn’t done anything at the time. He just took the embarrassment and he killed himself a year later. Fallon has never forgotten the incident with his dad. Its why he keeps track of everyone who “insults” him and now he’s out there. Fallon cleared his house. He had watched on cameras as the FBI raided the place and so he wasn’t coming back anytime soon. Fallon’s face was now everywhere. Hana’s stalker had gotten a picture of him and he had sent it to her.

Hana thought Wellman might have information. She met with him and he had treated it all as a game. Wellman had told Hana he wanted to get back together. Hana tried to remind him that they only went on one date, but it didn’t seem to matter to Wellman who had built a fictional relationship in his head and so Kenny tried talking to him. Kenny threatened him. He told Wellman to leave Hana alone and again Wellman laughed. He told Kenny that Hana secretly likes all the attention. Wellman was truly delusional. There was no point in talking to him and so the FBI Agents gave up on using him as a source.

They later learned that their victim Chris had been in contact with his stalker. Chris had gone into work and he had been contacted by Fallon. Fallon wanted to meet. Chris agreed because he thought he could handle Fallon on his own and he also had a gun with him. He borrowed the gun from his brother. His wife knew about it and so she was the one that alerts the FBI when she found out her husband was meet with Fallon. The FBI then called Chris. They tried to talk him out of the meeting and he refused to listen. He said he had to protect his family or what kind of man was he. Chris went to this meeting and before he knew it – Fallon had taken him, prisoner.

Fallon was still upset about Chris cutting him off with the doctor. He accused Chris of thinking he was better than him and he started in on the torture. The FBI later found the two of them, but by then, Fallon had a gun pointed to Chris’s head and he hadn’t wanted to give Chris up. The FBI had to talk him down. They were able to get through to Fallon by telling him his father had committed suicide.

It turns out David’s mother had covered up because she hadn’t wanted the neighbors to find out. So, David has believed this whole time that his father died from a heart attack. He thought his father was so embarrassed that he died from it and he’s always blamed himself for it. He thought if he had done something that day that his father wouldn’t have died. And that’s not the truth.

David was told the actual truth. He broke down in tears when he heard what happened and he handed over Chris.

This whole experience had been an eye-opener for Hana. She later confronted Wellman with everything he put her through and she ended it by telling him she was done with him.