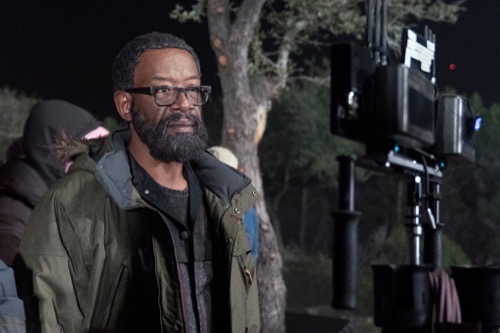 On AMC tonight Fear The Walking Dead (FTWD) airs with an all-new Sunday, October 25, 2020, episode and we have your Fear The Walking Dead Recap below! On tonight’s FTWD season 6 episode 3 called, “Alaska,” as per the AMC synopsis, “Al and Dwight go rogue on a recon mission to follow one more lead.”

Baby Morgan is crying, Morgan is there and he is smiling over her. Morgan gives supplies to Isaac’s wife, Rachel, now that she is alone; he got them from the main Pioneer camp and smuggled them in for her. He assures her that he has somebody on the inside, referring to Daniel. Morgan heads out, he doesn’t say where he is going. He actually goes to make a weapon. He tells Rachel that he is scared that he is not going to be the man that people knew.

We see Al and Dwight, they enter a funeral home and kill the walkers inside. Al is still recording. They check the dead’s ID and see where they come from. Dwight finds a case of beer, the two sit outside and drink a bottle, but it is skunked. Their drinking is cut short when Isabelle calls in on the radio, Al says she has been trying to track her movements. Dwight tells Al to heck with everything, go meet Isabelle at drop site Baker. He says he can pretend that she is dead and he killed her walker version.

It’s nighttime, they arrive at drop site Baker, an office building in the city. They happen upon a walker that is on the ground, Dwight checks his ID and he was from Alaska. The building is filled with walkers and rats. They find a group of survivors, who want to know why they are recoding to them. The woman, Nora, tells a man named Lee to put them in the office and lock the door.

Inside the office, the two survivors come back to see them and tell them that they need their help. Dwight and Al are taken to a room where there are lots of sick people, Al says it looks like they have the Bubonic Plague and they will all die without antibiotics. Al tells Dwight that they have to go, they run to the stairwell, Al blocks the door so they can’t follow them.

Dwight and AL are holding up in another area, Al breaks through a wall and they find another way to the roof. It is filled with rates and more walkers are all around, the two make a run for it. They lock themselves in the bathroom, Al asks Dwight, “what is it,” he looks into the mirror, it looks like Dwight is infected. Al tells him that she told him not to come. She says she is going to make this right. Dwight tells her to stay away from him, she tells him it takes a day or two to come out. He tells her it is not over, he is going to get her to the roof, it is the least he can do for her.

A knock at the door and Nora is there. Al needs to decide, will she find meds for Dwight and Nora’s group or will she meet with Isabelle. Nora is visibly shaken by killing the walkers and Al asks her what was the name of her friend who went on the roof and got killed, she says Mark. Al looks through the ID’s she and Dwight gathered, she finds Mark’s ID and gives it to Nora who is thankful. Turns out that Nora is one of the good people. Dwight talks about Sherry and how if he had the chance, he would meet her and hug her. He tells Al to go to the roof and meet Isabelle. The two hug and Al thanks, Dwight. Al leaves for the rooftop, Nora and Dwight stay behind, they are on the 32nd floor.

Al is on the rooftop, she opens a video of Dwight and watches it, it is his goodbye video. Al shoots a flare into the sky, then radios Isabelle and tells her to reverse course because the plays are infected with the plague, not safe to land. Al is thanked for the warning and suggested staying off the channel. Al says, “it is good to hear your voice because there aren’t that many people left.” There is a box of supplies that were meant for Isabelle on the rooftop, it has enough antibiotics to treat everyone with the plague, what a coincidence!

Dwight asks what happened on the rooftop, Al says she lost a bother once and didn’t want that to happen to him. Al and Dwight lead the group of survivors away from the infected building, in hopes of finding a new place to live. Al finds a fresh can of spray paint, Al believes the plague was brought there on purpose.

It’s daylight, Dwight hears a voice on the radio saying they say the signal flare and asks if everyone is ok. Much to Dwight’s shock, he knows who that voice belongs to, it’s Sherry. Then we see Dwight run out of the building and into Sherry’s arms for a big hug and a kiss.