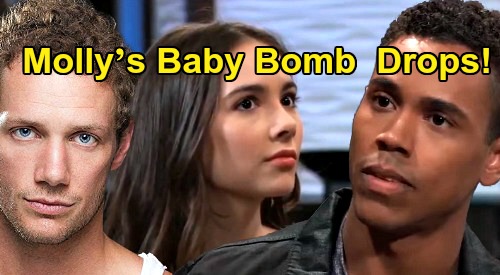 General Hospital (GH) spoilers tease that a baby bomb news update is set to drop in Port Charles during the week of May 18-22. One PC resident will learn she’s pregnant – and you can bet it’ll be a big surprise! In an interview with Soap Opera Digest, GH Co-Head Writer Dan O’Connor offered some exciting hints about what’s ahead.

“In a shocking twist, one of our beloved characters finds out that she is expecting a child – and this pregnancy could be a sign that a long-brewing conflict is about to reach its climax, one that will have lasting ramifications for all of Port Charles,” O’Connor said.

General Hospital spoilers don’t confirm the identity of this pregnant character, but it seems pretty obvious it’s Molly Lansing-Davis (Haley Pullos). Willow Tait (Katelyn MacMullen) will be stuck in court all week, so she wouldn’t have an opportunity to take a pregnancy test.

There’s not really any conflict in Willow’s story either; it’s all about doing what’s best for Wiley Quartermaine-Corinthos (Erik and Theo Olson). Molly, on the other hand, will be free to find out if she’s got a bun in the oven.

There’s also some conflict to deal with since Brando Corbin (Johnny Wactor) got on Sam McCall (Kelly Monaco) and Kristina Corinthos-Davis’ (Lexi Ainsworth) bad side.

Is this baby the result of Molly and Brando’s hot hookup? A “Brolly” baby would bring Alexis Davis (Nancy Lee Grahn), Sonny Corinthos (Maurice Benard) and the rest of the Corinthos clan into this.

It might also make Jason Morgan (Steve Burton) determined to find out who this Brando guy really is. What does anyone know about Brando other than the basics? Jason could be on a mission to find out!

However, TJ Ashford (Tajh Bellow) would be most affected by this bombshell since he has no idea Molly slept with someone else. Molly never would’ve hopped in bed with Brando if she’d known TJ was kidnapped and in danger. Since Molly thought TJ dumped her and moved on, she decided to have some fun for the night with Brando.

It looks like that fun night could turn into a lifetime of raising a child – at least if Molly decides to keep this baby. Since O’Connor pointed to lasting ramifications, it certainly sounds like Molly will opt to have the kid.

Of course, Molly may face a paternity mystery at first. Since Molly presumably slept with TJ and Brando around the same time, she may not know for sure who the father is. TJ was only gone for a few days in soap time. Making the baby Brando’s would provide far more drama, but this pregnancy should force the cheating exposure either way!