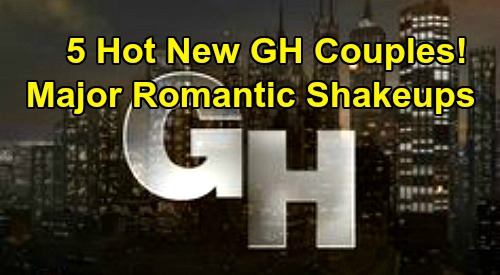 General Hospital (GH) spoilers tease that some romantic shakeups are on the horizon. GH fans can see that some breakups are brewing along with some new love stories. It’s exciting to see the potential for some fresh sizzle, so let’s consider five couples that seem to be on the way.

Part of Nina Reeves (Cynthia Watros) may always love Valentin Cassadine (James Patrick Stuart) – and she certainly adores his daughter, Charlotte Cassadine (Scarlett Fernandez). There’s always a chance these two will come back together following this wedding catastrophe, but probably not for quite some time.

That means Nina will most likely have a chance to move on for a while, and Jasper “Jax” Jacks (Ingo Rademacher) seems to be her best romantic option right now. Jax isn’t the perfect man, but he’s more capable of giving Nina the kind of love she deserves at the moment. Perhaps a fresh start could be good for them both!

From the second Amanda Setton debuted as a Brook Lynn Ashton recast, the writing was on the wall for a Brook Lynn and Julian Jerome (William deVry) fling. Of course, it could turn into something more if their chemistry is sizzling enough. Julian and Brook Lynn have slowly been forming an intriguing bond.

Between the potential for this to drive Ned Quartermaine (Wally Kurth) crazy and the underlying secret of what Julian did to Lucas Jones (Ryan Carnes), Brook Lynn and Julian could be an interesting duo to root for. Whether this is just some flying sparks or something more meaningful, GH could go some fun places with the pairing.

Come on now. Anyone who thinks they aren’t going to pair Nikolas Cassadine (Marcus Coloma) and Ava Jerome (Maura West) after that grand wedding entrance hasn’t been watching soaps long enough. Nik saved Ava from the water and burst through the doors with Ava in his arms. He’s her hero, so a love story’s clearly brewing. Ava needs a complex man with some darkness within, and Nik fits the bill.

Dare we say a Liesl Obrecht (Kathleen Gati) and Martin Gray (Michael E. Knight) pairing might be looming? Liesl deserves the chance to find love and happiness. Martin could be the perfect guy for Liesl to fall for. They seemed to have a chem test at Wyndemere recently – or at least the setup for what might be a romantic connection.

It’s worth mentioning that Liesl’s knowledge of the baby swap will likely come to light. Nelle Benson (Chloe Lanier) could even try to pin the switch on Liesl somehow. General Hospital spoilers say Liesl may find herself with legal woes, and Nelle may be more trouble than she’s worth to Martin. Perhaps Martin will ditch Nelle as a client and make Liesl his new one. It could be an opportunity for them to grow closer.

General Hospital seems to be setting up a Willow Tait (Katelyn MacMullen) and Michael Corinthos (Chad Duell) pairing as well. That’s a bummer for Willow and Harrison Chase (Josh Swickard) fans, but how can GH not explore “Millow” under the circumstances?

It’s easy to imagine Willow playing mom to Jonah Corinthos after the truth comes out. Michael will definitely do what he can to make this shocker easier for Willow. Besides, the kid’s obviously going to need a mother figure since Nelle’s such a bad one! General Hospital is clearly building toward Michael and Willow’s future, so it’s time to prepare for a “Chillow” split at this point.

Which couples are you looking forward to in 2020? We’ll give you updates as other GH news comes in. Stay tuned to the ABC soap and don’t forget to check CDL often for the latest General Hospital spoilers, updates and news.