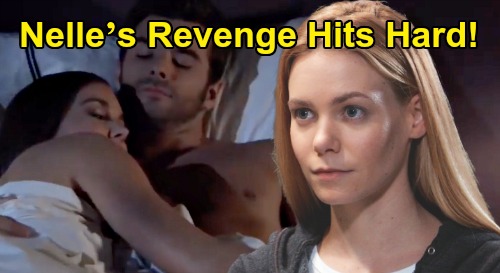 General Hospital (GH) spoilers tease that Nelle Benson (Chloe Lanier) will stir up loads of trouble once she’s a free woman. Nelle will certainly go after “Wiley Cooper-Jones” aka Jonah Corinthos (Erik and Theo Olson) any way she can get him. However, that won’t be Nelle’s only goal. She’ll also have revenge on her mind – and you can count on several targets.

There’ll naturally be some of the usual suspects like Michael Corinthos (Chad Duell) and Carly Corinthos (Laura Wright). We also can’t forget about Harrison Chase (Josh Swickard), who duped Nelle and led to her incarceration.

Michael was part of that plan, but Chase was instrumental since it was ultimately his sting operation. They couldn’t have pulled it off without Chase’s old connection to Nelle and his role at the PCPD.

Speaking of that old connection, Nelle’s undoubtedly irked that Chase turned on her later. She has no problem fooling others, but she doesn’t like to be fooled.

Nelle also seemed irritated by Chase’s total lack of concern for her after Ryan Chamberlain’s (Jon Lindstrom) “attack.” She needled Chase about him still caring, but he made it clear he was just doing his job.

Now Willow Tait (Katelyn MacMullen) knows what Nelle looks like and is going to be wary of her, too. It’s easy to imagine them sparring once Nelle’s on the outside. Nelle will want revenge on Chase, but hurting Willow will be a bonus in her eyes.

Willow believes she’s “Wiley’s” biological mother, so that’s yet another reason for Nelle to dislike her.

General Hospital spoilers say Nelle will indeed burst Willow and Chase’s blissful bubble. They’ve been enjoying domestic life, but that should change thanks to Nelle’s plot for vengeance. Chase and Willow will have their little world thrown into turmoil.

Nelle’s craziness will affect their relationship in some surprising ways, so it’ll be interesting to see what she has in mind.

The “Wiley” reveal is something Nelle will help pull the trigger on, so that’s one way Nelle will cause chaos. Willow’s pain over learning her true son died will be a lot to tackle. Chase will try to help, but that’s the kind of sorrow that could drive them apart.

Of course, Nelle could have more sinister plans in mind. Willow has worried about Chase landing in danger on more than one occasion. He seems destined for a scary hospital stint at some point, so Nelle might prompt it.

GH has laid the groundwork for Chase’s life-threatening situation through dialogue, so they might as well follow through.

It’s even possible Harmony Miller (Inga Cadranel) spilled some secrets to Nelle while they were cellmates. Nelle may have some ammo that Harmony never expected would be used to harm Willow – and as a result, Chase.

There’s nothing that matters more to Chase than Willow, so Nelle would be wise to focus on her if she wants proper revenge.

Whatever the case, General Hospital spoilers say “Chillow” mayhem is on the way. This relationship will take some serious hits thanks to Nelle, but will they survive the storm? We’ll give you updates as other GH news comes in. Stay tuned to the ABC soap and don’t forget to check CDL often for the latest General Hospital spoilers, updates and news.