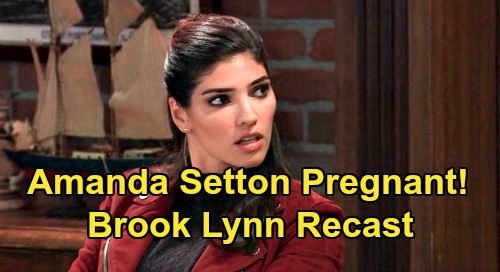 General Hospital (GH) spoilers tease that Brook Lynn Quartermaine (Amanda Setton) will have a new look soon – and there’s an exciting reason why. It turns out Amanda Setton is pregnant, so she can’t be on set due to the obvious risks right now.

Setton is on maternity leave and has been temporarily recast according to Daytime Confidential, but there’s no word on when she’s expected to return to GH.

Depending on when Setton’s due date is, she could be off the show for quite some time. This baby is certainly terrific news for Setton, but losing her is a difficult blow for General Hospital.

Setton is a great fit for the role of Brook Lynn, so let’s hope GH has found a replacement who’s a strong actress and can keep Brook Lynn’s stories moving along.

This isn’t the first recast news to spill at General Hospital lately. GH fans may have heard that the role of Sam McCall (Kelly Monaco) is set to be recast as well – although that recast won’t last as long.

Kelly Monaco had some mask issues when she arrived back on set following the shutdown, which led to a 14-day quarantine. Lindsay Hartley was tapped to fill in for those two weeks.

As for Setton, we’ll let you know as soon as her replacement is announced. Brook Lynn seems poised to be in the middle of some big action in the coming months, so it’s definitely important for GH to get it right!

Brook Lynn could easily be part of a major quad with Dustin Phillips (Mark Lawson), Lulu Spencer (Emme Rylan) and Dante Falconeri (Dominic Zamprogna) depending on how things play out.

Whatever the case, we all hope everything goes well for Setton during the remainder of her pregnancy. General Hospital viewers are rooting for Setton to deliver a happy and healthy baby when the time comes. Unless the plan changes, Setton will eventually reprise her role as Brook Lynn and keep delivering some hot drama in Port Charles.