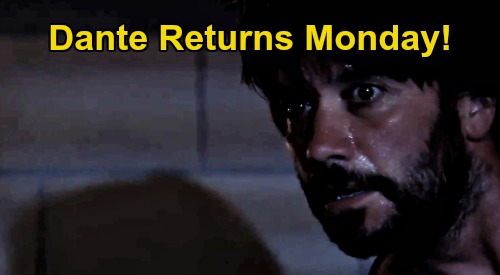 General Hospital (GH) spoilers tease that viewers are in for a big surprise on the new episode of GH airing on Monday, August 3rd. As you might have heard, the show has been teasing a super surprise in the first 5 minutes of GH on Monday’s episode, and now we can report what that surprise is – Dante Falconeri (Dominick Zamprogna) returns and will be back on our screens!

The great news was broken by Entertainment Weekly, along with a short video clip on its site showing Dante’s return. A bearded Dante is shown in a WSB Facility in Geneva, Switzerland. In the clip, Dante is alone in his dark room having a terrible nightmare, then wakes up with a start realizing that he’s been dreaming.

That’s all that the clip shows, so viewers will have to tune in to GH today to see what other details we get about Dante and how he’s doing.

As GH viewers will remember, Dante was put through a terrible ordeal at the hands of Raj Patel (Nosir Dalal) in Turkey, and when he was finally released from Raj’s imprisonment, it was revealed that Dante had suffered beatings and brainwashing.

Once Dante returned to Port Charles in 2019, he started experiencing terrible symptoms of PTSD, to the point where he decided that it was better and safer for his family for him to go away for an indefinite period of time for treatment with the WSB.

Well, shortly before GH went on hiatus due to the coronavirus pandemic, there was a lot of talk about Dante on the show, with his mom Olivia Quartermaine (Lisa LoCicero) even hiring a psychic for information about her son.

As GH viewers know, Olivia has been beside herself as she’s watched Lulu and Rocco Falconeri (O’Neill Monahan) take to Dustin Phillips (Mark Lawson). Olivia has been pretty vocal about wanting Lulu to wait for Dante.

We’ll have to wait to see what happens from here – will Dante be returning home soon? The EW clip certainly doesn’t make it seem like Dante is anywhere close to being ready to come home from a psychological standpoint. In fact, Dante appears to be still suffering from night terrors, which would indicate that he’s still in pretty bad shape.

But maybe Dante will get some news from Port Charles that will make him want to return home – if he ends up, for example, deciding to read a letter from Olivia and hearing that his son Rocco is starting to think of another man as a father figure, then there could be some motivation for Dante to get himself back to Port Charles pronto.

At any rate, you won’t want to miss today’s new episode of GH – the show is back from hiatus, and fan-favorite Dante will be back on canvas!

Stay tuned to the ABC soap and don’t forget to check CDL frequently for the latest General Hospital spoilers and news. And be sure to check out our daily episode recaps so you don’t miss any of the action!