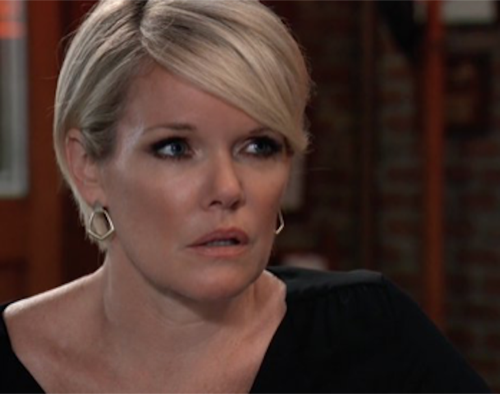 The evening seemed to be going well, until Ava instructed Franco to unveil her portrait and everyone seemed horrified by what they saw.

Of course, viewers didn’t see the portrait, so there’s some question about exactly what the portrait looks like, but it was clear from Ava’s and everyone else’s expressions that the photo wasn’t aesthetically pleasing.

So, what might have happened? It certainly hasn’t seemed like Franco was planning to deliberately ruin Ava’s evening, so one wonders if Franco’s actual portrait got switched out for another, unflattering portrait of Ava by someone.

But who would do something like this? Well, a switcheroo prank would seem to have Spencer Cassadine (Nicolas Bechtel) written all over it. Might he have somehow arranged for Ava to be humiliated during her big night at Wyndemere?

Spencer certainly has motive for running Ava’s evening, since he wants her away from Nikolas Cassadine (Marcus Coloma) and just detests Ava on principle.

Perhaps Spencer arranged to have Ava’s portrait replaced with a highly unflattering painting of her – like a painting of Ava with her disfiguring scars before her surgery to correct them.

That would certainly upset Ava and embarrass her in front of the gathered crowd. And it would potentially cause some major problems between Ava and her best friend, Franco.

We’ll see what happens here, but it’s possible, too, that Nikolas and Spencer were somehow in cahoots to ruin Ava’s big portrait unveiling. But assuming that the real portrait that Franco painted was switched out with an unflattering decoy, then where’s the actual painting?

Will the real painting be quickly found, so that Ava’s evening isn’t totally ruined? GH viewers will have to tune in to see!

Of course, we haven’t considered the possibility that the painting that got unveiled was actually Franco’s original portrait, and that it is just horrible.

Franco has been worrying lately about whether he’s lost his edge and his talents, so maybe everyone’s horrified reactions were the result of the painting just not being that good. One thing’s for sure – we should find out in pretty short order on Monday’s GH episode!

You won’t want to miss the first moments of Monday’s episode. What do you think happened with Ava’s portrait? Stay tuned to the ABC soap and don’t forget to check CDL frequently for the latest General Hospital spoilers, news, and daily episode recaps.