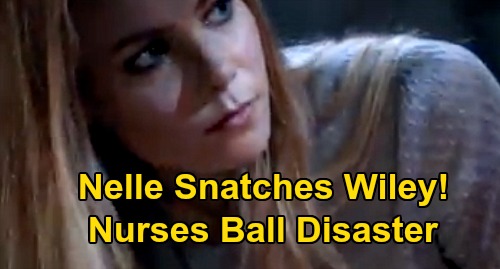 General Hospital (GH) spoilers tease that Nelle Benson Jerome (Chloe Lanier) seems to have a sinister plan cooked up. As GH viewers know, Nelle has placed a tracking device in Wiley Quartermaine Corinthos’ (Erik and Theo Olson) favorite stuffed animal as a way of keeping tabs on him.

Michael Corinthos (Chad Duell) and Willow Corinthos (Katelyn MacMullen) have no idea about the tracker, but it looks like they may have a big and unwelcome surprise coming.

A new GH promo teasing what’s going to go down at the annual Nurses’ Ball sheds some light on Nelle’s grand plan. Given that the Nurses’ Ball isn’t a kid-friendly event, Wiley will most likely be left in the care of others, while Michael and Willow go about their evening.

Well, the promo shows Nelle in a quick scene bending over something, which could very likely be Wiley’s bed or carriage at the Q mansion.

It would be just the right time for Nelle to snatch Wiley and get him away from Michael and Willow and the rest of the Quartermaines. Right now, Michael, Willow, and Carly Corinthos (Laura Wright) are just a little too confident and have done too much gloating over their big custody win.

And GH viewers know that Nelle secured phony passports for herself and Wiley from Valentin Cassadine (James Patrick Stuart), so she’s ready to scoop Wiley and flee the country.

It certainly looks like Nelle’s going to make her big move and take Wiley while everyone is occupied at the Nurses’ Ball. And this comports with the fact that Willow’s voice is heard in the promo exclaiming about something being wrong, as well as with the spoiler that Michael makes a startling discovery at the end of the week – just as the Nurses’ Ball will be winding down or completely over.

Or, she might pull a “Nelle” and just bash someone over the head to get up in Wiley’s room. GH viewers will remember that Nelle isn’t beyond attacking someone to get what she wants, so if Wiley is with a nanny that night, then the nanny could go down!

We’ll see what happens here, but it certainly seems like the timing will be right for Nelle to swipe Wiley right out of the Q mansion while the Nurses’ Ball is going on.

If Nelle does take her son, there will be a full-scale hunt on for the littlest Quartermaine-Corinthos. There should be some great action, so stay tuned to the ABC soap and don’t forget to check back with CDL for the latest General Hospital spoilers, news, and daily episode recaps.