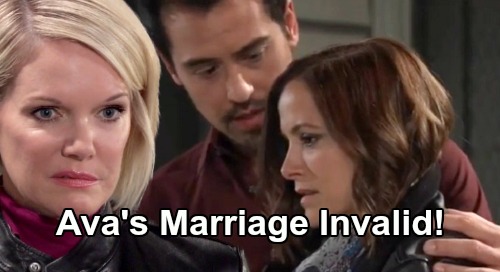 General Hospital (GH) spoilers tease that Ava Jerome (Maura West) seems to be pretty pleased with herself. She recently gloated to Nina Reeves (Cynthia Watros) that she was going to get a veritable fortune out of her marriage to Nikolas Cassadine (Marcus Coloma). As GH viewers know, Ava entered into a post-nuptial agreement with Nikolas shortly after they got married, and she stands to gain quite a bit.

But there were some conditions to the post-nup, which Ava seems pretty glib about. Under the agreement, if either Ava or Nikolas cheat on the other, then they stand to get nothing out of the deal.

But they’ve also agreed to a loveless, celibate marriage as well, and Ava seems to think that she’s got the upper hand and that Nikolas will be much more likely to cheat than she will.

But something tells us that Nikolas probably has something up his sleeve, since he seemed to agree to the post-nup a little too readily. He put up a little bit of a struggle, but ultimately agreed to Ava’s terms, and it was all just a little too easy.

And that leads us to wonder whether Nikolas is playing Ava and whether he’ll have the last laugh. 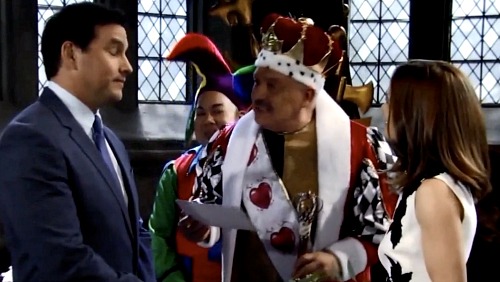 After all, it was only a few months ago when Hayden Barnes (Rebecca Budig) was still referring to Nikolas as her husband. Back when Nikolas came to town, which was in October of last year, it was made very clear on the show that Nikolas and Hayden were still married.

Now, unless those two arranged for a very hasty divorce that took place in the past couple of months – which seems highly unlikely – then Nikolas was already married when he married Ava. And if that’s the case, then “Nava’s” marriage would be completely invalid, and Ava would be entitled to nothing.

One wonders just how long Nikolas would want to keep stringing Ava along, though. After all, now that he’s got the codicil in his hands, there doesn’t seem to be much reason for him to hold on to his pretend union with Ava, unless there’s some other angle that we don’t know about yet.

It’s also interesting that Jasper “Jax” Jacks (Ingo Rademacher) hasn’t mentioned Nikolas’ marriage to Hayden at all. He certainly knew that Hayden and Nikolas were still married back in October 2019 when Nikolas came to town, but he hasn’t said anything to Nikolas or to Ava about it.

That could mean that Nikolas and Hayden got a divorce at some point, but you never know. At any rate, it will be interesting to see where this all leads.

Might Nikolas suddenly pull the rug out from under Ava at some point and reveal that their marriage never really existed? That would certainly leave Ava fuming and without much recourse, since she’s already handed over the codicil.

Do you think that Nikolas and Ava’s marriage is invalid? Stay tuned to the ABC soap and don’t forget to check CDL often for the latest General Hospital spoilers, updates, and news.