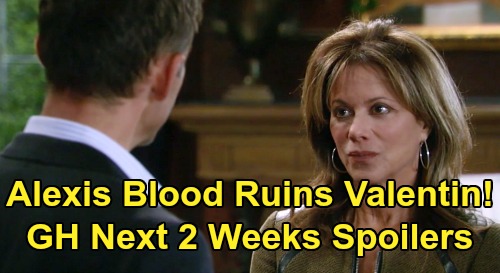 General Hospital (GH) spoilers for the next two weeks tease that the drama’s about to heat up in Port Charles. During the week of February 10-14, Sonny Corinthos (Maurice Benard) will fret over his father. Mike Corbin (Max Gail) may not be holding up very well after such a traumatic experience in Brooklyn. He had a rough time thanks to the shooting, but Sonny will want to support him.

It turns out someone else will pay Mike a visit – and she’ll cross paths with Sonny. Brook Lynn Quartemaine (Amanda Setton) will catch up with Mike briefly before offering Sonny a reminder.

Brook Lynn will reflect on losing a loved one to Alzheimer’s and insist that Sonny has to appreciate the time he has left with Mike. Brook Lynn won’t want Sonny chasing any more cures when he could just enjoy bonding with his father while he still has him.

Speaking of father-son bonding, Brando Corbin (Johnny Wactor) and Dev Cerci aka “Dev Corbin” (Ashton Arbab) will do some of that.

Sonny didn’t want Brando to know the real story about protecting Dev, but Brando will catch on fast. He’ll ultimately meet Dev and assure the Corinthos clan that he’s not going to blow their ruse.

Meanwhile, a chat with Alexis Davis (Nancy Lee Grahn) will convince Hamilton Finn (Michael Easton) to rat Peter August (Wes Ramsey) out. He’ll spill during a top-secret meeting with Jason Morgan (Steve Burton) and Sam McCall (Kelly Morgan), but things will head south after they take their new proof to Robert Scorpio (Tristan Rogers). Thanks to Peter’s sneaky move, it seems he’ll be off hook for now.

Over with Valentin Cassadine (James Patrick Stuart), his life will change for the worse. General Hospital spoilers say a devastating blow’s on the way, so that may involve not being a true Cassadine.

Alexis will provide her blood to test against Valentin’s, which means firm answers may be coming soon. GH fans recall that Alexis is Mikkos Cassadine’s (John Colicos) daughter so her blood must match Valentine’s if he is Mikkos’ son.

Could this also lead to the revelation that Charlotte Cassadine (Scarlett Fernandez) isn’t Valentin’s biological daughter? Time will tell, but there have been signs onscreen about a possible paternity change.

During the week of February 17-21, Lucas Jones (Ryan Carnes) will face more memory flashes. He’ll try to figure out what really happened the night of the crash, but Brad Cooper (Parry Shen) should fight him every step of the way.

That secret is also being kept by Marcus Taggert (Real Andrews), so Curtis won’t appreciate being left out of the loop. Nevertheless, Jordan will insist that Curtis needs to back off. She won’t want Curtis knowing more than he should and putting himself at risk.

As for Michael Corinthos (Chad Duell), he’ll battle suspicions over something. Will Nelle Benson Archer (Chloe Lanier) make a move to raise those suspicions? Could this tie in with a blunder of Brad’s instead? Either way, Michael will have a reason to do some digging and that could spell trouble.

As the mob war gets more intense, Carly may have to put her kids first and even get them off the property. It all depends on how well Jason and Sonny handle this mess!

It sounds like the next two weeks will be packed with action. We’ll give you updates as other GH news comes in. Stay tuned to DOOL and don’t forget to check CDL often for the latest General Hospital spoilers, updates and news.