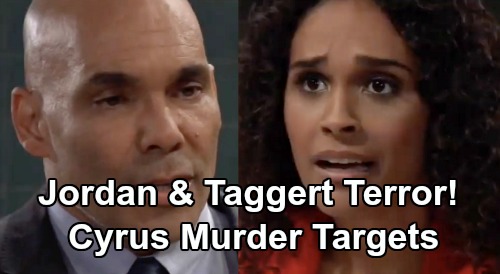 General Hospital (GH) spoilers tease that there’s far more to the story when it comes to Cyrus Renault (Jeff Kober). It turns out Cyrus may have other enemies in town besides Sonny Corinthos (Maurice Benard). Let’s look at all the clues and see where GH may be headed with this storyline next.

For starters, two different plots started up around the same time. We heard about Jordan Ashford’s (Briana Nicole Henry) old colleague dying – and we now know it was under very suspicious circumstances.

There was also Sonny’s truck hijacking, which put Sonny and Jason Morgan (Steve Burton) in Jordan’s orbit a bit more. It felt like these stories would be connected from the get-go.

Then, Marcus Taggert (Real Andrews) came on the scene just before all the shootout mayhem, which was orchestrated by Cyrus. That brings us to Taggert’s findings. It turns out Bob Massicotte was a bit of a hypochondriac, so he had two checkups a year.

Taggert discovered that there were no traces of drugs in Bob’s bloodwork leading up to the overdose. It pretty much serves as confirmation of foul play.

Taggert and Jordan discussed how Bob kept his end of the bargain; he took their secret to the grave! It seems likely that Bob paid a steep price for what the trio did – and what they did may be linked to Cyrus. This General Hospital baddie claims he got life without parole for something he didn’t do.

Did Jordan, Taggert and Bob manufacture the evidence? They may have felt there was just no other way to take Cyrus down. After all, Cyrus is a big drug kingpin.

Jordan and the rest of the gang worked together with the DEA. When Sonny warned Cyrus to leave, Cyrus declined citing “personal reasons” for his transfer to Port Charles. Those personal reasons may include revenge on Jordan.

Cyrus probably couldn’t have predicted that Taggert would also be in PC, but that’s a lucky break. Now Cyrus potentially has the other two people who took him down right where he wants them. Sonny faced Cyrus’ three-way sneak attack, but Jordan and Taggert may be next! Cyrus clearly has more tricks up his sleeve.

General Hospital spoilers say Curtis Ashford’s (Donnell Turner) suspicions will grow stronger in the coming episodes. He can tell something’s up between Taggert and Jordan, so he won’t rest until he figures out what it is.

We’ll give you updates as other GH news emerges. Stay tuned to the ABC soap and don’t forget to check CDL often for the latest General Hospital spoilers, updates and news.