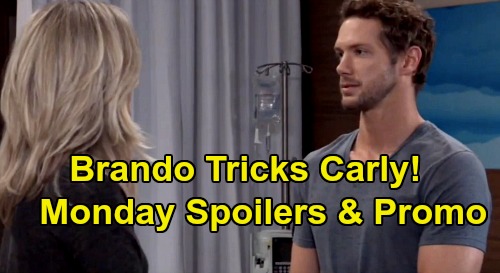 GH fans know Finn was tempted to tell Sam about Peter’s link to the hitman, but he couldn’t quite take the plunge. Nevertheless, Finn will indeed spill soon!

At the Metro Court, Peter will join Maxie Jones (Kirsten Storms) and Damian Spinelli (Bradford Anderson) for breakfast. While they’re all chatting, Ellie Trout (Emily Wilson) will call Spinelli with good news. Just as Spinelli was hoping, Ellie scored a job that’ll allow their family to stay in the Port Charles area.

Maxie will be thrilled, so she’ll give Spinelli a big hug as perturbed Peter watches. Peter knows Spinelli’s got his number, so he won’t share Maxie’s enthusiasm.

When Spinelli starts fishing for info, Peter will take that as his cue to leave. He’ll end up headed for Anna Devane’s (Finola Hughes) place, which will be important soon enough.

That’s because Robert will already be there catching up with Emma Scorpio Drake (Brooklyn Rae Silzer) and eventually facing Anna’s fury. She’ll explode over Robert plotting Peter’s takedown behind her back, but Robert will defend his actions. Neither one of them will realize Peter’s eavesdropping on their confrontation.

Once Peter’s discovered, he’ll pretend he’s clueless about the reason for their argument. However, Peter will make a crucial call later. He’ll set something in motion that could thwart Robert and “JaSam’s” current plan.

Over with Neil Byrne (Joe Flanigan), he’ll give Alexis Davis (Nancy Lee Grahn) updates on the fight to keep his medical license. Neil will point out that they want Alexis to testify, so she’ll quickly agree. Alexis will want to do everything in her power to help Neil save his career.

Josslyn will also offer a warning during this chat. She’ll insist Trina needs to be careful, so it’ll be interesting to see what’s got Joss so worried.

Josslyn might fret about Sonny Corinthos’ (Maurice Benard) mob war trickling over into this area of her life. She certainly doesn’t want her pals to be put in harm’s way.

Then again, Trina looks somewhat determined in Monday’s GH preview video. This might involve a change of heart about finding her long-lost relative or some other mission Trina could start up.

Next, Carly Corinthos (Laura Wright) will grill Brando Corbin (Johnny Wactor) about his past as well as the secrets he might be keeping. She’ll wonder if Brando knew who she was when he saved her life.

Brando will face quite an interrogation, but he’ll ultimately pass Carly’s test and score a room at the Metro Court. Of course savvy GH fans realize Brando is most likely not telling Carly the truth!

Finally, Sonny will lose his cool as he talks to Jason Morgan (Steve Burton). He’ll shout about being totally exposed, but Jason will do his best to calm Sonny down. They just have to keep their wits about them and focus on Cyrus Renault’s (Jeff Kober) destruction.