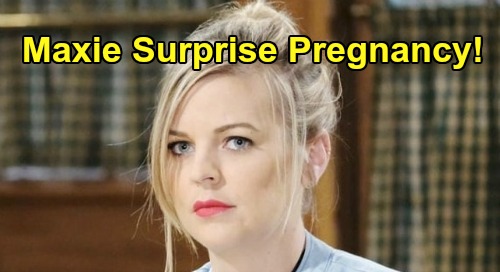 General Hospital (GH) spoilers tease that the countdown is on to when Peter August (Wes Ramsey) will be exposed. GH fans know Peter hasn’t been honest with Maxie Jones (Kirsten Storms), Anna Devane (Finola Hughes) or the other good people of Port Charles. He was far more involved in the memory-mapping project than anyone previously thought and worked closely with Helena Cassadine (Constance Towers).

Peter is also the reason Drew Cain (Billy Miller) is presumed dead – and Andre Maddox (Anthony Montgomery) nearly lost his life twice because of him. General Hospital fans will recall that Andre was brutally stabbed and later almost faced a bullet from Peter’s hitman.

Peter was Andre and Franco Baldwin’s (Roger Howarth) “hero,” but that’s only because he was behind the hit in the first place.

GH seems to be whitewashing Peter in some ways. It feels like they want fans to have sympathy for him as this man with a difficult past who wants to be better.

There’s this constant “poor Peter” theme of how he didn’t have a Christmas stocking growing up, didn’t have a birthday party, liked watching the picture-perfect families on old sitcoms, etc.

Of course, it’s tough to have much sympathy for Peter when he still hasn’t proven that he’s changed. We can’t just ignore the fact that Peter is a killer. So what if his childhood wasn’t ideal? Boo-hoo! Plenty of people have rough family backgrounds without becoming murderers.

Nevertheless, General Hospital writers seem to think they can get by with this, so Peter’s goose may not be as cooked as it seems to be. They also focus on the fact that Peter can connect with kids.

Even Emma Scorpio Drake (Brooklyn Rae Silzer) urged Anna not to listen to the naysayers. The doubters don’t know “Uncle Peter” like they do!

When you add all this up, could it mean that GH writers have a plan – one that involves some twist to keep Peter around? Is there a chance at redemption for Peter and even a chance to salvage his relationship with Maxie? There might be.

Could Maxie realize she’s pregnant with Peter’s baby? Just imagine if Maxie explodes and swears she’s done with Peter only to find out she’s carrying his child. It might take some time for the tension to thaw, but babies have a way of making that happen.

Plus, GH writers like to push this nice, guilt-ridden Peter. They don’t want to portray him as a true villain despite his very villainous actions.

What better strategy to pull Peter out of the darkness entirely? They could make him a dad and have him resolve to be a far better father than Cesar Faison (Anders Hove).

If Peter can get off the hook for his crimes and avoid prison, he’d still have custody rights. Maxie would be forced to at least co-parent, which could lead to her forgiving him once again down the road.

Although Maxie doesn’t really need another kid right now, a surprise pregnancy would be a reasonable path for this story. It could be Peter’s shot at turning his life around for real this time!