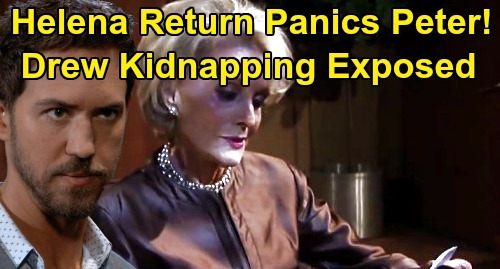 General Hospital (GH) spoilers tease that Peter August (Wes Ramsey) seems to finally be in a good place, at least as far as he knows. As GH viewers know, he could be in a world of trouble and lose virtually everything if some truths ever come out about his past. He’s been covering his tracks steadily for weeks, and he seems now to have a reprieve.

All Peter really wants at this point is to be rid of the specter of Cesar Faison (Anders Hove) in his life. But that has seemed hard to attain in recent months, largely because of the late Shiloh Archer (Coby Ryan McLaughlin), who blackmailed Peter after revealing that he knew that Peter worked directly for Helena Cassadine (Constance Towers) to capture Drew Cain (Billy Miller) in Afghanistan years ago.

And when Peter helped Shiloh, that ended up opening a can of worms that led Peter to have to frame Sam McCall (Kelly Monaco) for Shiloh’s murder in order to deflect attention from himself.

Now Jason Morgan (Steve Burton) and Sam are working to uncover the dirt on Peter, but they really have no leads to go on. Of course, there’s the information that Anna Devane (Finola Hughes) has uncovered, but she’s hiding it in order to protect Peter.

Peter’s got a lot of secrets, and he desperately needs them to stay buried, since the life he’s building with Maxie Jones (Kirsten Storms) and his reputation in the community depend on it. Peter could also be looking at serious prison time, since he ended up killing the assassin that he hired to kill Andre Maddox (Anthony Washington) and Franco Baldwin (Roger Howarth).

Peter’s escalated to murder, and the stakes are high. But at this point, he thinks he’s got everything hidden and under control.

Well, soon, something big is going to happen that is sure to put Peter into an absolute tailspin. As Highlight Hollywood first reported, Helena Cassadine will be returning to Port Charles, as Constance Towers was reported to be filming new GH scenes in December, 2019 and set to air in February 2020.

Exactly how Helena will be back remains to be seen, either alive or in flashbacks but most likely in connection with the issue of who will be inheriting the Cassadine fortune – Nikolas Cassadine (Marcus Coloma) or Valentin Cassadine (James Patrick Stuart).

Peter’s nerves are already shot, and he’ll probably really go into crisis mode when if Helena returns alive. And given that Jason, Sam, and Robert Scorpio (Tristan Rogers) are all going to be keeping a close eye on Peter, they just might notice his reaction to Helena and start putting some pieces together.

Do you think that Peter’s crimes and misdeeds will be exposed as a result of Helena’s return? Stay tuned to the ABC soap and don’t forget to check CDL often for the latest General Hospital spoilers, updates, and news.