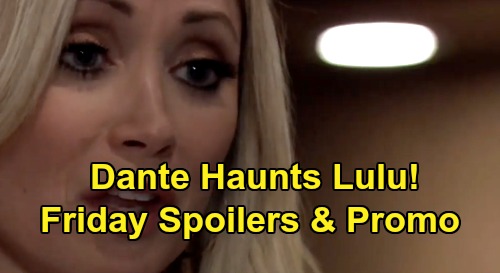 General Hospital (GH) spoilers for Friday, February 7, tease that Lulu Spencer (Emme Rylan) will make a confession. At GH, Lulu will visit Laura Collins (Genie Francis) and open up about Dustin Phillips (Mark Lawson). She thinks Dustin is a great guy and their relationship is deepening, but Lulu will be unsure about taking this any further. Lulu just won’t know if she has it in her to fall in love with another hero.

After the way things ended with Dante Falconeri (Dominic Zamprogna), Lulu will be haunted by her loss and sorrow. She’ll certainly be wary of facing more. Laura will completely understand that – and really, only Lulu can decide what’s right for her. However, Laura may suggest that Lulu shouldn’t guard her heart too closely.

Whether Dustin is “the one” or not, living in fear is no way to live at all. Lulu might miss out on something special if she holds back. Of course, Lulu may have a little competition if Dustin and Brook Lynn Quartermaine (Amanda Setton) start to reconnect. They’ll share some nice scenes in Friday’s episode, so you never know.

General Hospital fans know Brook Lynn’s hit some snags in her career lately. Dustin will talk to Brook Lynn about that sleazy, controlling music producer and hope her luck turns around.

Brook Lynn will wonder why Dustin would hope anything good happens to her after the way she ditched him. She’ll be truly sorry about that, but Dustin will undoubtedly insist it’s all water under the bridge.

Meanwhile, Nina Reeves (Cynthia Watros) will have another conversation with Valentin Cassadine (James Patrick Stuart). In typical Valentin fashion, it seems he just won’t take no for an answer. Valentin still loves Nina and can’t accept that their relationship is over.

Nevertheless, Nina will try to clear up the matter on Friday. She’ll contend that they need to move on from each other, but the look on Valentin’s face will suggest he’s not giving up.

Next, Lucas Jones (Ryan Carnes) will demand answers about what went down before the crash. He just had a memory flash of Brad Cooper (Parry Shen) preparing to tell him something in the car, so he knows there was a secret.

Lucas will insist that Brad was building up to a confession. Brad and Julian Jerome (William deVry) will exchange a nervous look as Lucas seeks the whole story. He obviously won’t get the truth right now, but those memory flashes could become a bigger issue moving forward.

At the Quartermaine mansion, Nelle Benson Archer (Chloe Lanier) will hurl accusations. As Michael Corinthos (Chad Duell) stands nearby, Nelle will point at him and insist he brought her there so he could kill her.

Oh, Nelle! Stop being so dramatic. Nelle’s the one with murderous tendencies, but she’ll work whatever angle she’s working now and get on Michael’s last nerve in the process.

Speaking of working angles, Ava Jerome (Maura West) will continue working hers. Her marriage to Nikolas Cassadine (Marcus Coloma) is complicated, but Ava isn’t afraid of what he might do to her.

That’s important since Nik will make a veiled threat on Friday. He’ll lean close to Ava’s cheek and menacingly whisper for her to go away for good. Ava has no intention of doing that, so Nikolas will have to outsmart her if he wants to end this marriage. The trouble is Ava will be hoping to outwit Nik, too!