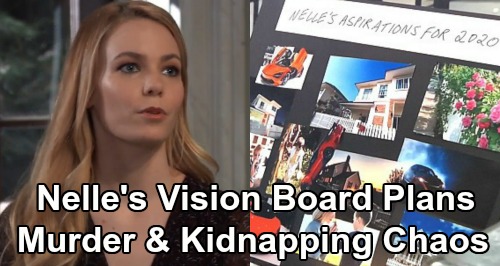 General Hospital (GH) spoilers tease that Nelle Benson Archer (Chloe Lanier) has taken the first steps toward the future she wants. GH fans know Nelle recently revealed herself as Shiloh Archer’s (Coby Ryan McLaughlin) widow. She made it clear she was going after those ELQ shares and hinted about going after “Wiley Cooper-Jones” (Erik and Theo Olson), too.

Of course, it should come as no surprise since viewers have repeatedly seen Nelle’s vision board. Nelle made it in prison, but she happily totes it around everywhere she goes. It’s clear that this vision board – titled “NELLE’S ASPIRATIONS FOR 2020” – means a great deal to Nelle.

By moving in the Quartermaine mansion, Nelle accomplishes one of her goals: she’s got a new beautiful home. Nelle would undoubtedly like her own mansion later, but this one will do for now. Next on the checklist, Nelle needs that shiny sports car. She can eventually take the bigger step of trying to get her child back.

As a side note, Brad Cooper (Parry Shen) really needs to be paying more attention to this vision board! Nelle’s got pictures of a mother and her son all over it – not a dad in sight!

It should be obvious that Nelle wants to cut Brad and everyone else out of “Wiley’s” life. That’s especially true when it comes to Michael Corinthos (Chad Duell), Carly Corinthos (Laura Wright) and everybody connected to that family.

Going after custody of “Wiley” as Shiloh’s widow and heir seems like a longshot, but stranger things have happened. If Nelle can get a judge who basically worshipped Shiloh, she could probably score a victory.

Even if she can’t, Nelle could always use kidnapping as a last resort. That’s probably an idea that’s in the back of her mind – something she’s willing to do if she has to.

However, General Hospital fans will recall the final puzzle piece on Nelle’s vision board. It’s certainly the most concerning one since it goes against all the other happy, optimistic photos.

There’s a dark, sinister-looking pic of a plain black car in the fog at night. It doesn’t fit with the three red sports cars featured, which are clearly versions of Nelle’s dream car.

This black car’s got its headlights on – almost like it’s part of an ominous plan to run over someone or possibly blow someone up inside. There’s a chance it could be the getaway vehicle if Nelle’s forced to kidnap “Wiley,” but it could also involve a murder plot on Carly, Michael or anyone else that Nelle envisions as a victim.