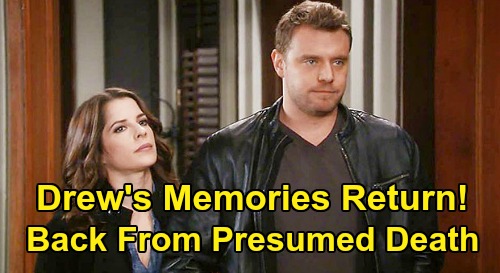 General Hospital (GH) spoilers reveal that Drew Cain’s (Billy Miller) story may not be over just yet. Let’s consider how GH ended Drew’s run and what they may have in store moving forward. For starters, Drew’s exit left a lot to be desired. Fans of Billy Miller and his character were disappointed by the sendoff – or lack thereof.

GH writers certainly didn’t give Drew any kind of closure. His loved ones barely grieved at all. Plus, we had Franco Baldwin (Roger Howarth) in the mix with Drew’s old memories. Even people like Monica Quartermaine (Leslie Charleson) acted like Franco’s version of Drew was good enough, so “oh well” about the real one!

However, Drew’s presumed death leaves the door wide open for his comeback. Franco has also returned to normal, which is great news for many reasons.

General Hospital could’ve had Franco keep Drew’s memories and still allowed him to get Franco’s memories back. In other words, Franco could’ve been forced to navigate life with both sets, but that’s not what GH writers chose to do.

The fact that there’s no trace of Drew left inside Franco’s mind works out well. General Hospital wouldn’t have wanted two Drews essentially, so this could be a sign that the real one will return.

Shortly before Drew’s departure, he even had an almost memory. It was more like a feeling, but Drew was still able to figure out where Tex had hidden the money.

Drew felt like he had bought Oscar Nero Quartermaine (Garren Stitt) that car for a reason – and he obviously did since it was no coincidence that it belonged to Tex’s wife.

Even back when Drew first “met” Kim Nero (Tamara Braun), there was a certain familiarity about her. It seemed like Drew’s memories could still potentially return on their own – though they never did.

The show could play all those beats if Drew comes back down the road. If Drew was actually on that plane and survived, he might’ve even hit his head and jostled some of those memories to the surface.

Naturally, there are other ways that could happen. If Peter August (Wes Ramsey) has minions holding Drew captive somewhere, the torment of it all could affect Drew’s state of mind, too.

It’s easy to imagine Drew’s memories rushing back due to emotional trauma and whatever horrible things he might be enduring. General Hospital spoilers say Jason Morgan (Steve Burton) and Anna Devane (Finola Hughes) will keep digging in the coming weeks.

Peter doesn’t realize they may stumble upon the one thing that could expose him, but what is that thing exactly? Could it be Drew himself?!

It’d be exciting for Drew Cain to return with his memories and deliver some Peter payback. If Drew’s ultimately found, that could definitely complicate Peter’s plans. Would you like to see Billy Miller return to GH and reprise his role? We’ll give you updates as other GH details emerge. Stay tuned to the ABC soap and don’t forget to check CDL often for the latest General Hospital spoilers, updates and news.