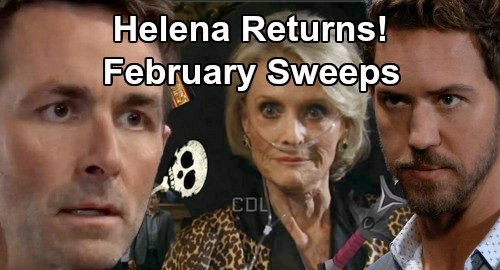 General Hospital (GH) spoilers has some exciting news to pass on about an upcoming major return to the show. Highlight Hollywood is reporting that Constance Towers is returning to the ABC soap in the role of Helena Cassadine. Helena was last seen on GH in August of 2019 in a flashback sequence occurring during the capture of Drew Cain (Steve Burton) in Afghanistan.

At that time, it was revealed that Peter August (Wes Ramsey) was working directly for Helena to capture Drew. Shiloh Archer (Coby Ryan McLaughlin) happened to see the capture go down, and he later blackmailed Peter over it.

Helena’s name has come up a lot in recent weeks on GH, as she is the person who allegedly left the codicil to Mikkos Cassadine’s (John Colicos) will in her own portrait for Nikolas Cassadine (Marcus Coloma) to someday find.

Nikolas thinks that the codicil is his ticket to the Cassadine fortune, whereas Valentin Cassadine (James Patrick Stuart) claims that it’s all a hoax perpetrated by Helena as her last big joke on Nikolas.

Well, it seems that Helena will soon be on the Port Charles scene (either alive or in flashbacks) to provide some answers about the codicil. According to Highlight Hollywood, Constance Towers taped her scenes in December, and at the time of taping her airdates were expected to be between February 5-7.

Given the impeachment delays, Helena’s air dates will probably be several days after that time frame.

Of course, Helena won’t just stir up trouble on the Cassadine/codicil scene. Her arrival may also impact another character – Peter. As GH viewers know, Peter has gone to great lengths to protect his secret about working for Helena at the time of Drew’s capture from Afghanistan and his involvement in what subsequently happened to Drew.

In fact, Peter was willing to bust Shiloh out of prison in order to protect his secret, and he was willing to kill both Andre Maddox (Anthony Washington) and Franco Baldwin (Roger Howarth) as well.

He later changed his mind, but there doesn’t seem to be much that Peter wouldn’t do in order to protect his life with Maxie Jones (Kirsten Storms) and his good standing in Port Charles.

So we can imagine how surprised Peter is going to be if he sees Helena alive and well. Helena stands to expose his secret, so her arrival is sure to cause him some angst and probably some panic as well. It will be interesting to see how Peter handles the big reveal.

Peter stands to lose everything if she decides to blab about their history together.

At any rate, expect to see Helena back in action in mid-February. We’ll keep you informed when and if more details about her upcoming storyline are released! Stay tuned to the ABC soap and don’t forget to check CDL often for the latest General Hospital spoilers, updates, and news.