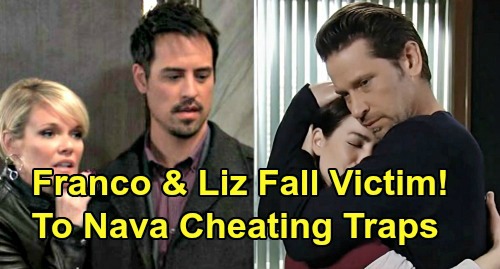 General Hospital (GH) spoilers tease that Ava Jerome (Maura West) and Nikolas Cassadine (Marcus Coloma) will have quite a dilemma on their hands. GH fans know neither one of them’s keen on this marriage, but they have their reasons for committing to it. However, they’ll also have their reasons for trying to find some loopholes and workarounds.

Nik and Ava will brainstorm separately about how to divorce and remain rich. There’ll be a battle for control of the Cassadine fortune, which will pull another couple into the drama.

Now that Franco Baldwin (Roger Howarth) is back to normal, he’s settling back into his old life with Elizabeth Baldwin (Rebecca Herbst) and the boys. Nevertheless, we all knew the peace wouldn’t last long.

‘Friz’ needs a new story, so it looks like Ava and Nikolas will present their newest challenge. GH spoilers say Franco and Liz’s marriage will be tested thanks to another duo’s marital woes, so that lines up perfectly.

The trouble will start with a tense meeting between Franco and Nikolas. That could set up some anger for Nik and get the wheels turning on a new scheme.

As for Ava, General Hospital spoilers say she’ll work on a plot of her own. Liz will be suspicious after Ava asks Franco to paint a portrait of her. Ava indeed has an agenda – and it may be one similar to Nik’s.

Franco has a close bond with Ava, so Nikolas may hope he can nudge them together. He may hope it could spark cheating and give him grounds for the divorce he wants.

Of course, Liz will be upset over Nik’s involvement in Hayden Barnes’ (Rebecca Budig) departure for a while, but she’ll get over it eventually. Nikolas and Liz have some history, so this may be something Ava can use to her advantage.

Ava might work a similar angle to Nikolas and hope she can jumpstart some cheating on his end.

If nothing else, Ava and Nik may have the goal of creating compromising positions that seem to be betrayals. They’ll just be looking for ways to trigger that infidelity clause in the post-nuptial agreement. Some fake proof would serve the same purpose.

Regardless, this potential plan may not work out like either of them hopes. Franco and Liz are one of the strongest couples in Port Charles, so they may wise up to Nik and Ava’s games. It’s probably just a matter of time until Ava and Nikolas break their own rule about not sleeping together, so be prepared for ‘Nava’ passion!