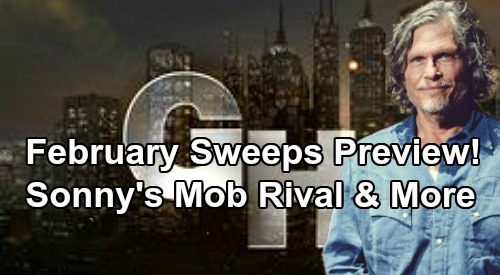 General Hospital (GH) spoilers tease that some major bombshells are brewing for February sweeps. GH will deliver some unraveling mysteries and explosive moments, so we’ve got a juicy preview for you. Here’s a sneak peek of what you can expect as February sweeps heats up.

Peter will do everything in his power to make sure he remains one of the good guys in most Port Charles residents’ minds. Jason and Sam’s future depends on scoring the necessary evidence against Peter, so they won’t want to blow this.

As for Anna Devane (Finola Hughes) and Hamilton Finn (Michael Easton), Peter’s downfall could put their future in jeopardy! Suspicions about Peter will rev up for Finn, but Anna will dig her heels in and try to believe Peter’s a decent man. It’ll definitely lead to more “Fanna” friction.

This new kid on the block is actually an inmate at Pentonville from where he is directing a takeover of the Corinthos turf. Of course this won’t please Sonny, who’ll want to protect his family and business.

Of course, that could lead to more danger – and Marcus Taggert’s (Real Andrews) lingering presence in town won’t help matters. Sonny will grow suspicious when Taggert seems too interested in his new enemy.

Laura Collins (Genie Francis) will find herself torn since she considers Sonny a friend, but she’ll also have a duty to clean things up around PC as the mayor.

Meanwhile, Carly Corinthos (Laura Wright) will get to know her hero, Brando Corbin (Johnny Wactor). Although Carly will be grateful Brando saved her from the shootout, his return from the “dead” will complicate the situation for the Corinthos clan. It’s safe to say Brando’s world will become a bit more complicated, too!

Next, Alexis Davis (Nancy Lee Grahn) will fight to help Neil Byrne (Joe Flanigan). She’ll try to help Neil get his medical license back in a friendly capacity, but that sounds like a recipe for disaster. How long until they’re crossing the line once again?

Over with Nina Reeves (Cynthia Watros), she’ll try to move on from Valentin Cassadine (James Patrick Stuart). It’ll be a slow process – and it’ll be made tougher since Valentin will still want Nina in his life. Fortunately, Jasper “Jax” Jacks (Ingo Rademacher) will serve as a steamy distraction for Nina. These two are headed for a hot hookup soon.

As you might expect, Lucas will have some memory issues due to his brain injury. He won’t recall Brad Cooper’s (Parry Shen) confession…yet.

Naturally, some memory flashes will present problems. Julian will grow increasingly fearful that Lucas will remember and blow this secret sky high. The same goes for Brad, who should be more nervous than ever.

Nelle Benson Archer (Chloe Lanier) will continue stirring plenty of pots, so that’ll be another layer of issues to contend with.

Across town, Franco Baldwin (Roger Howarth) and Elizabeth Baldwin’s (Rebecca Herbst) marriage will be tested due to a different couple’s woes. It looks like Ava Jerome (Maura West) and Nikolas Cassadine’s (Marcus Coloma) marital mayhem could affect Liz and Franco’s relationship in some surprising ways.

Nik and Ava will keep plotting against each other, but they’re both pretty crafty characters. Their attempts to sabotage each other should bring some twists and turns, so stay tuned. We’ll give you updates as other GH news comes in. Stick with the ABC soap and don’t forget to check CDL often for the latest General Hospital spoilers, updates and news.