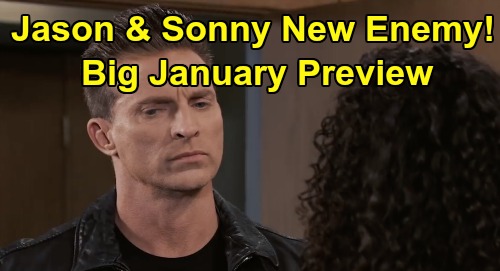 General Hospital (GH) spoilers tease that we’re in for an exciting week on the ABC soap. The new General Hospital promo is titled “Big January” and deals with the aftermath of the shocking reveal that went down when Nikolas Cassadine (Marcus Coloma) burst in on the wedding of Valentin Cassadine (James Patrick Stuart) and Nina Reeves (Cynthia Watros).

Once everyone’s shock at seeing Nikolas alive wears off, there will be some decisions to make on the part of the police commissioner, Jordan Ashford (Briana Nicole Henry). We can’t forget that Nikolas was a fugitive at the time of his death, so he could be in some legal hot water now that he’s back.

At any rate, it seems that Jordan would want to question Nikolas about where he’s been, and especially what he saw with respect to Valentin’s actions shortly before the wedding.

Jordan will probably want to know exactly how Ava Jerome (Maura West) ended up in the icy waters surrounding Wyndemere, and whether Nikolas can back up Ava’s account that Valentin deliberately pushed her off of the parapet at the castle.

As GH viewers know, Valentin is in the process of gathering Charlotte Cassadine (Scarlett Fernandez) and trying to make an escape from Port Charles, but we’ll see how far he actually gets.

At any rate, it seems that Nikolas may have a bit of a struggle emerging back into public life in Port Charles. He’ll certainly be keen to reclaim his fortune from Valentin as soon as possible, as well as possession of Wyndemere. We’ll see how that goes and how the legal battle over the codicil heats up.

In addition, there will certainly be some shocked folks in Port Charles as news of Nikolas’ return gets around town, plus those who aren’t so shocked, which will cause some problems for sure.

Sonny Corinthos (Maurice Benard) is shown in the promo looking quite upset, and it’s likely over the fact that Carly Corinthos (Laura Wright) kept the secret about Nikolas being alive from him and everyone else.

And one can’t imagine that Laura Collins (Genie Francis) is going to be too happy when she realizes that Carly, Jasper “Jax” Jacks (Ingo Rademacher), Ava, and Nina knew about Nikolas and didn’t bother to tell her about it.

We imagine Laura will have some choice words for the people who kept the awful secret about Nikolas from her.

The new GH promo also addresses an upcoming confrontation between Jason Morgan (Steve Burton) and Jordan, as Jordan asks him if he and Sonny have made themselves an enemy. Jason and Sonny have had their fair share of enemies over the years but could this be a surprise new one?

Of course, Jason looks pretty mum in the promo, and he surely won’t give Jordan any clues about his or Sonny’s business.

Finally, the new promo shows Ava in Charlie’s Pub with Julian Jerome (William deVry), telling him that she’s about to have the sweetest revenge. We’ll see exactly who she’s talking about here, but she’s likely taking about Valentin, since he did just attempt to kill her over the codicil.

But since she’s got a plan going with Nikolas and has apparently handed the codicil over to him, she’s going to enjoy watching Valentin lose everything.

It certainly looks like we’re in for an exciting week, so stay tuned! We’ll give you updates as GH news comes in. Stick with the ABC soap and don’t forget to check CDL often for the latest General Hospital spoilers, updates, and news.