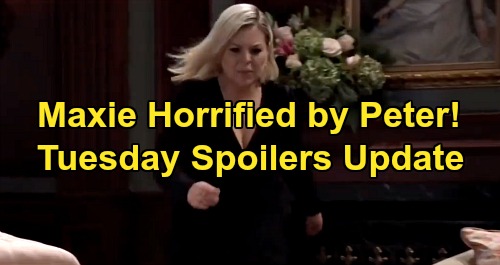 General Hospital (GH) spoilers update for Tuesday, January 7, teases that Sonny Corinthos (Maurice Benard) will have a heart-to-heart with Carly Corinthos (Laura Wright). He was upset that she kept Nikolas Cassadine’s (Marcus Coloma) survival a secret – particularly because it meant being hiding things with Jasper “Jax” Jacks (Ingo Rademacher).

However, Carly couldn’t trust Sonny not to hand Jax over to the authorities. These two clearly have some issues to figure out, so Sonny will wonder what’s next for them. Luckily, neither one will be willing to throw in the towel. There’s still a lot of love left between Carly and Sonny, so they’ll call a truce and try to move forward.

Over with Anna Devane (Finola Hughes), she’ll land in exactly the right spot at exactly the right time. Perhaps Anna will save the day as a result. In Tuesday’s GH preview video, it appears Hamilton Finn (Michael Easton) is providing support. He’s huddled near Felicia Scorpio (Kristina Wagner), who potentially seems a bit rattled.

Mac Scorpio will also be on hand for the aftermath of whatever goes down. He’ll talk to Anna following some ordeal, which might be a near purse-snatching or some other thwarted danger. Then again, Anna’s right-place-right-time encounter might be a little less risky.

Either way, Anna will note that won’t be satisfied until she gets all the answers. She may be referring to what happens in Tuesday’s General Hospital episode – or this could be about Peter August (Wes Ramsey). There are many more hints to uncover when it comes to Peter and his sinister actions.

For now, Peter will face off with a furious Valentin Cassadine (James Patrick Stuart). After all the chaos that just went down thanks to Nik, Valentin’s ready to scoop Charlotte Cassadine (Scarlett Fernandez) up and bolt.

Maxie insisted Valentin wasn’t going anywhere with Charlotte, and Peter will likely agree it’s best if Charlotte stays put. Valentin isn’t someone who likes being told what to do – especially when he’s already been pushed to his limit for the night. He’ll punch Peter in the gut and apparently leave him for Maxie to find on the floor.

Maxie will be horrified when she walks in, so she should rush to Peter’s side and make sure he’s OK. Of course, Ava Jerome (Maura West) will be feeling more than OK on Tuesday.

Ava just announced she’s going to marry Nikolas, so Laura Webber (Genie Francis) will voice her disapproval. The same probably goes for Lulu, but Ava won’t care about any complaints she hears.

Instead, Ava will think her luck is going to change as soon as she says her vows. She’ll encourage everybody to stick around for the ceremony, so we’ll see if anyone actually does!

Next, Nina Reeves (Cynthia Watros) will just want to get the heck out of Wyndemere. She won’t be interested in support from Jax, Curtis Ashford (Donnell Turner), Jordan Ashford (Briana Nicole Henry) or anyone else.

Nina will try to take off, but Jax may go against her wishes and stop her or at least follow her. He’ll definitely be worried about Nina and how she’s holding up. General Hospital spoilers say more shockers are brewing, so don’t miss what’s in store.