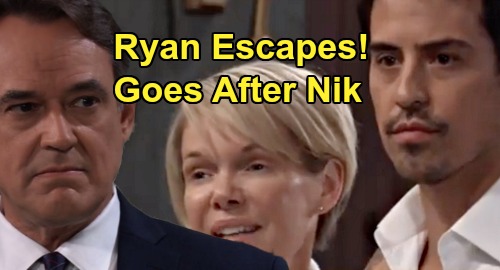 General Hospital (GH) spoilers tease that Nikolas Cassadine (Marcus Coloma) will have to keep his end of the bargain. Ava Jerome (Maura West) was willing to hand over the codicil that shifts the Cassadine estate over to Nik. Now it’s time for Nikolas to marry Ava, which was apparently one of Ava’s offscreen conditions.

Of course, there’s a chance something could go wrong between now and the wedding, but it makes perfect sense for GH to take this route. Ava isn’t marrying for love, but it could turn into a real marriage full of romance and passion.

It seems obvious that General Hospital is going to pair up Nikolas and Ava, so this is a reasonable way to make sparks fly.

However, the news of this marriage isn’t going to go over well – especially with one inmate at Pentonville! Ryan Chamberlain (Jon Lindstrom) remains completely obsessed with his fierce goddess. In Ryan’s eyes, there’s no other woman who can meet him on his level.

Ava has a dark side that Ryan always wants to bring to the surface. He still has visions of being the ultimate evil power couple. How’s Ryan going to feel when he learns Ava’s got a new man, particularly one who also has dark impulses?

Ryan’s bound to feel like Nikolas isn’t worthy of Ava. He won’t like being replaced by someone who’s a pale imitation.

You can bet that Ryan’s jealousy will explode, which could lead to some dangerous decisions. GH has been dangling the possibility of Ryan’s escape for quite some time. Once Nelle Benson (Chloe Lanier) is a free woman, she’s vowed to provide pictures of Ava and keep him in the loop on all Ava’s activities.

If Nelle keeps her word, getting constant reminders of Ava and her new hubby won’t be an easy thing for Ryan to handle. His rage will keep growing until he just can’t take it anymore.

Will that set up Ryan’s long-awaited getaway? Ryan will stop at nothing to get what he wants, so he may break out of Pentonville and go after Ava.

Naturally, that could put Nikolas’ life at stake. Nik may be so worried about thwarting Valentin Cassadine’s (James Patrick Stuart) retaliation that he never sees Ryan coming! Do you think Ryan will escape and cause trouble for the newlyweds?