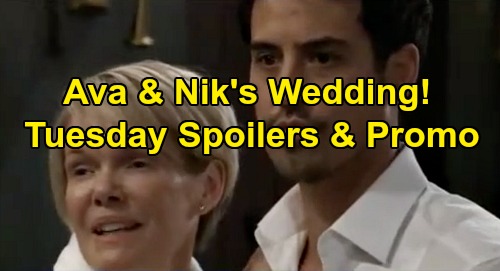 General Hospital (GH) spoilers for Tuesday, January 7, tease that Ava Jerome (Maura West) will feel like her luck is turning around. GH fans know Nikolas Cassadine (Marcus Coloma) said he now has the codicil thanks to Ava. However, he had to promise Ava something in return – and that something is their looming marriage!

Ava just dropped the wedding bomb, so Laura Webber (Genie Francis) will struggle to process it on Tuesday. She’ll wonder what Nikolas thinks he’s doing, but Ava will insist it’s happening. She’ll gleefully hope Laura and everyone else will stay for the ceremony.

Meanwhile, Nina Reeves (Cynthia Watros) will be eager to make a quick exit. Jasper “Jax” Jacks (Ingo Rademacher), Curtis Ashford (Donnell Turner) and Jordan Ashford (Briana Nicole Henry) will all express concern about Nina. They’ll try to help, but Nina will shout that she doesn’t need anyone to hold her hand. She just wants to get of that house!

Valentin Cassadine (James Patrick Stuart) will also be anxious to take Charlotte Cassadine (Scarlett Fernandez) and run. Nikolas brought plenty of chaos with him when he announced his return. He insisted Valentin isn’t really a Cassadine and brought everybody up to speed on the codicil.

Valentin also had to deal with the blow of losing Nina, so he just wants to grab Charlotte and leave Wyndemere.

Maxie Jones (Kirsten Storms) argued that wasn’t happening – and it looks like Peter August (Wes Ramsey) may back her up. That could be why Valentin punches Peter in the stomach in Tuesday’s episode. It’s clear that Valentin has had enough drama for one night, so he’s in no mood for more from Peter.

Maxie will cry out after discovering something on the floor later, so that may be Peter writhing in pain. She’ll become even more convinced that Valentin’s a horrible human being, but she won’t realize Peter’s keeping dark secrets, too. You can bet those secrets will come to light down the road.

Other General Hospital spoilers say Sonny Corinthos (Maurice Benard) will have an important question for Carly Corinthos (Laura Wright). He’ll ask what comes next for them, but that may depend on whether Sonny can get past Carly’s betrayal.

Fortunately, GH viewers can expect a truce on Tuesday. Carly and Sonny still have some things to sort out, but they may make peace and hope they can talk through what they need to eventually.

Since Anna will wind up in the right place at the right time, it’s possible she’ll prevent a mugging or some other sort of danger for Felicia. That might explain why Finn’s close enough to provide a comforting presence while Mac seeks all the facts from Anna.

Regardless, Anna declare that she won’t be satisfied until she gets all the answers. Whether this is about a new crime involving Felicia or another Peter clue, Anna will be determined to find the whole truth.