BY hellodrdavis on September 4, 2020 | Comments: Leave Comments
Related : Comings & Goings, Days of Our Lives, General Hospital, Hot News, Soap Opera, Spoiler, Television, The Bold and the Beautiful, The Young and the Restless 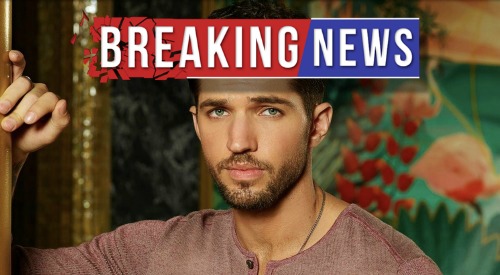 General Hospital (GH) spoilers has some news to pass on about a former GH star. Bryan Craig, who portrayed Morgan Corinthos on the ABC soap from 2013-2016, recently posted something on Twitter that has fans buzzing.

As General Hospital fans will remember, Bryan left the show after Morgan was killed off, and ever since there’s been a contingent of fans who have hoped that Morgan could have somehow survived and will return to his parents Sonny Corinthos (Maurice Benard) and Carly Corinthos (Laura Wright).

Well, after he left General Hospital, Bryan went on to star in the CW series Valor, as well as the ABC primetime soap Grand Hotel. Bryan also had some roles in a couple of indie films as well, but now it seems that he’s ready to return to daytime soaps!

Bryan posted the following tweet, which he pinned to the top of his feed: “I’m ready to work and up for grabs so who’s it gonna be? @GeneralHospital @YRInsider @BandB_CBS @nbcdays.”

We should note that Bryan was sure to tag all four of the soaps, indicating that he’s ready and willing to work on the Young and the Restless, Days of Our Lives, the Bold and the Beautiful, or General Hospital.

Of course, times are tough right now, and with most primetime shows still not taping, it makes sense that Bryan and other actors would look back to daytime for possible roles.

Well, it seems that Bryan’s fans would love to see him back on GH. As one fan replied on Twitter: “The show needs Morgan! Great character and actor! Juicy story too for the C family. Where has Morgan been? Please give us a story we want!”

Another fan even came up with a possible story for Morgan on GH. This fan said: “Yes and make Sasha his girlfriend but only after they have established a bond and he helps her with her addiction…”

Of course, this fan is referring to Sasha Gilmore (Sofia Mattsson), who was recently paired with Morgan’s brother Michael Corinthos (Chad Duell). That would make for some good drama!

Judging from fan comments to Bryan’s post, it seems that most would prefer for Bryan to be back on General Hospital, but Bryan seems just as willing to show up on Y&R, DOOL, or B&B as well.

Who knows – Bryan could turn up on Y&R as a new influencer working for Chancellor Communications or he could even be involved in the Las Vegas missing man storyline with Adam Newman (Mark Grossman) and Chance Chancellor (Donny Boaz).

We’ll see what happens here, but the possibility of Morgan returning to General Hospital is pretty exciting. Of course, the ball is in the court of TPTB on the various shows at this point, but something tells us that fans will be dreaming of a Morgan return. Of course, we’d take Bryan back on any of the shows – he’s been missed!

Would you like to see Bryan Craig return to daytime? Stay tuned to the ABC soap and don’t forget to check CDL often for the latest Soap spoilers, daily episode recaps, and news.

I’m ready to work and up for grabs so who’s it gonna be?@GeneralHospital @YRInsider @BandB_CBS @nbcdays