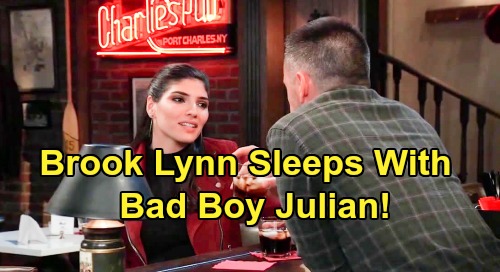 General Hospital (GH) spoilers tease that Julian Jerome (William deVry) will have to deal with each passing day without his son. The longer Lucas Jones (Ryan Carnes) remains in a coma, the more fearful Julian will get about him never awakening.

Naturally, Julian’s guilt will take a toll as well. He’s the reason Lucas is in his current predicament, so that’s something that’ll haunt him in the weeks ahead. Julian will also have to worry about Brad Cooper (Parry Shen) and this whole Nelle Benson Archer (Chloe Lanier) situation. Nelle provides a very real threat and has the potential to blow up this baby swap scheme.

Julian warned Brad to keep it together since they can’t afford any more mistakes with Sonny Corinthos (Maurice Benard). However, Brad doesn’t have a great track record on that kind of thing. He’s pretty much been popping antacids from the moment the switch happened. Brad seems poised to spiral out of control, so Julian will have to keep an eye on him.

Of course, all the stress will really start to add up. Julian will feel overwhelmed and alone, but he may find a shoulder to lean on. GH spoilers say Brook Lynn Quartermaine (Amanda Setton) will provide emotional support to someone – and if anyone needs emotional support, it’s Julian. He’ll be a mess underneath that tough exterior, which will only pull Brook Lynn closer.

Brook Lynn is intrigued by how complex Julian is, so that fascination will continue. She’ll appreciate his softer side more and more as he suffers. Naturally, Julian can’t reveal the entire story to Brook Lynn, but she can at least support him over the topics that are public knowledge.

Brook Lynn will view Julian as a loving father who wants his son back and a devoted grandpa fighting to protect his grandson. Between Lucas and “Wiley Cooper-Jones” (Erik and Theo Olson), Julian will have a lot on his mind. He’ll likely open up to Brook Lynn and get that emotional support we mentioned.

General Hospital spoilers say sparks are set to fly between Julian and somebody unexpected. Brook Lynn and Julian might seem like an odd duo, but it looks like they’ll form a deeper connection. That connection could lead to them hitting the sheets sooner or later.