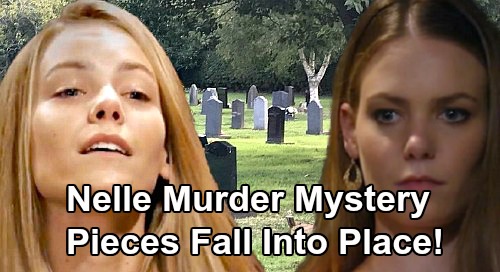 General Hospital (GH) spoilers reveal that Nelle Benson Archer (Chloe Lanier) could be in grave danger. Nelle has emerged from Pentonville more confident than ever. She walks around like she owns the place and constantly delivers veiled threats. Nelle always feels like she’s the smartest person in the room and has every intention of getting what she wants.

However, Nelle’s also a villain and villains never get what they want indefinitely. That means Nelle’s headed for a downfall, but what kind? General Hospital could send her back to prison after the baby swap, which would bring some pros and cons.

Nelle’s a fantastic troublemaker, so there’s definitely value in keeping her around. Her haters probably wouldn’t agree, but she knows how to bring drama!

Even so, GH writers might feel like they’ve done about all they can do with this character. Throwing Nelle behind bars again might be kind of repetitive anyway.

Once the baby swap is exposed and Nelle faces backlash, will there by anywhere left to go with her? Maybe not. If that’s what General Hospital writers determine, Nelle’s life could certainly be in jeopardy.

We also have to acknowledge just how many people hate Nelle and view her as a threat. Nelle’s list of enemies is growing every day! Michael Corinthos (Chad Duell) and Carly Corinthos (Laura Wright) loathe Nelle with everything in them.

Sonny Corinthos (Maurice Benard) is certainly capable of ordering that hit – and Jason Morgan (Steve Burton) would probably be more than willing to carry it out.

Of course, the Quartermaines have been brought into this now through all the ELQ drama. Ned Quartermaine (Wally Kurth), Olivia Quartertmaine (Lisa LoCicero), Tracy Quartermaine (Jane Elliot) and Brook Lynn Quartermaine (Amanda Setton) are all furious with Nelle.

Then, there’s Brad Cooper (Parry Shen) who’s terrified of what Nelle will do next – as Jonah’s mom she is capable of totally destroying his life and marriage. Julian Jerome (William deVry) also has a strong motive to want Nelle out of the picture. Willow Tait (Katelyn MacMullen) has a growing feud with Nelle, and Harrison Chase (Josh Swickard) can’t stand Nelle either.

There was even a mention of Sharon Grant, Zachary Grant’s sister, along with the whole vengeful Grant family. GH fans definitely can’t forget that Nelle killed her fiancé – and they obviously don’t feel like Nelle truly paid for that since she’s now a free woman.

Since Nelle married Shiloh Archer (Coby Ryan McLaughlin), that could pull some jealous and crazy Dawnies into this.

Ryan Chamberlain (Jon Lindstrom) could even be a problem if Nelle doesn’t deliver on her promise to keep him updated on Ava Jerome (Maura West). You don’t want to get on a serial killer’s bad side!

Bottom line, there are oodles of people who would line up to murder Nelle if given the chance. If there was ever a character to put at the center of a murder mystery, it’s Nelle.

General Hospital spoilers say the hatred for Nelle will keep growing in town. Are GH writers setting the stage to wipe Nelle off the map permanently? It’s worth considering now that Nelle’s seemingly being written into a corner.

General Hospital viewers will be eager to see how it all turns out! We’ll give you updates as other GH news comes in. Stay tuned to the ABC soap and don’t forget to check CDL often for the latest General Hospital spoilers, updates and news.