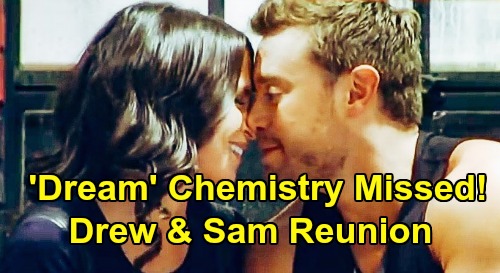 General Hospital (GH) spoilers reveal that Jason Morgan (Steve Burton) and Sam McCall (Kelly Monaco) are always going to have plenty of “JaSam” fans. However, there are always going to be “Dream” shippers, too! Many GH viewers still miss Sam and Drew Cain’s (Billy Miller) romance in Port Charles.

Drew was presumed dead in a plane crash, but a presumed death means nothing on a soap. Billy Miller could easily make a comeback at some point – and that’s probably why GH left the door open like that. There was nothing final about Drew’s exit, so there’s a chance Miller will reprise the role someday.

On Twitter, “Dream” supporters like to reflect on fond memories of their favorite pairing. Some of them are holding out hope for Drew and Sam’s future as well. It never hurts to have hope!

“Sam and Drew had the best chemistry & he had such potential,” one General Hospital fan said. “I miss Billy so much. It’s a shame they ruined it and are erasing his character.” Another fan insisted, “Don’t worry Sam, I think Drew is still alive and held somewhere by Peter.”

Of course, some GH viewers get caught up in the “JaSam” and “Dream” fan wars. There’s always been a fierce debate among those fans about which pairing was better. Naturally, those on “Team Dream” feel like Drew was Sam’s best match.

“How could you still be a #Jasam fan after experiencing #Dream?” one fan said. “Drew put Sam and those kids first at all times. Jason returned and went right back to valuing Sonny, Carly and their brats over his own family.”

Others may recognize that “JaSam” is popular and understand why, but they like what they like! Sometimes it’s just a matter of preference. One thing’s for sure though: most General Hospital watchers can agree it was unfair for Franco Baldwin (Roger Howarth) to get the memory-mapping story. Drew deserved to get his memories back and figure out who he really was.

“If there was any justice on this show, Billy Miller would still be on #GH, integrating Drew’s OWN memories, and figuring out how to win Sam back…” argued one passionate fan. It’s clear that there are a lot of strong Drew opinions!

Do you miss Kelly Monaco and Billy Miller’s onscreen chemistry? Would you like to see Miller return as Drew and reunite with Sam? We’ll give you updates as other GH news comes in. Stay tuned to the ABC soap and don’t forget to check CDL often for the latest General Hospital spoilers, updates and news.