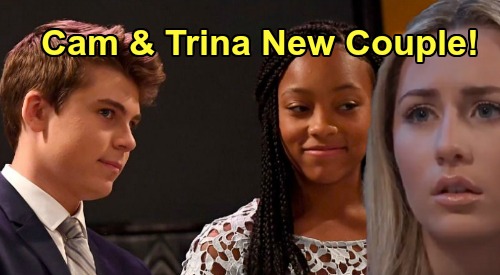 General Hospital (GH) spoilers tease that Josslyn Jacks (Eden McCoy) may find herself wishing she’d taken her shot with Cameron Webber (William Lipton). These two have always had a solid friendship, but it’s been obvious Cam was looking for more. He was patient while Oscar Nero Quartermaine (Garren Stitt) marched toward death as well as after Oscar’s death.

Cameron certainly understood that Josslyn needed time to heal, but now she’s focused more on Dev Cerci aka “Dev Corbin” (Ashton Arbab). Dev rejected Josslyn after that kiss they shared, which left her disheartened. Is Joss about to lose her backup option as well?

Trina Robinson (Sydney Mikayla) set out to help Cameron make Josslyn jealous at the midwinter formal, but plans changed due to their kidnapping. The result was an experience that deepened an already deep friendship. Cameron and Trina are really connecting, so GH seems to be setting up their love story.

With that in mind, it looks like Cameron and Trina could make Joss jealous for real! During the week of March 16-20, General Hospital spoilers, news and updates say Josslyn will be stuck in misery.

Josslyn will also clash with Laura Webber (Genie Francis) later), so that could certainly involve Cameron. Perhaps Laura will feel like Joss is being a bit of a brat after everything Cameron and Trina have been through.

This seems like a classic case of “you snooze, you lose.” If Josslyn wasn’t making her move with Dev, she was crushing on her teacher, Dustin Phillips (Mark Lawson). Joss hasn’t given Cameron much attention really.

When he needed a friend during Franco Baldwin’s (Roger Howarth) ordeal, Trina was the only one who was truly there for him. Trina once threw Josslyn’s lack of interest at the time in Joss’ face.

Josslyn has spent her days concentrating on other guys and journaling while Cam was left pining. She may be forced to suffer while Cam moves forward with Trina. Could this lead to some drama between Trina and Josslyn? Could these besties become bitter rivals?

General Hospital spoilers say Joss could at least develop some bad coping mechanism. Something seems to be brewing thanks to Josslyn’s crush on Dustin. There’s a chance Joss will make some surprising moves if she’s spinning out over Cameron.