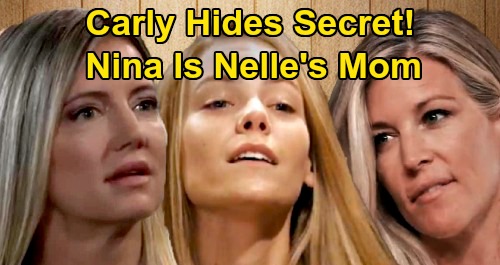 General Hospital (GH) spoilers tease that the mystery of Nina Reeves’ (Cynthia Watros) biological daughter will continue to unravel. It looks like we’ll get some firm answers about the woman who owns the other half of that half-heart pendant necklace. Let’s consider a few recent clues and try to figure out where this storyline’s headed next.

GH fans know there have been clues all along that Willow Tait (Katelyn MacMullen) might be Nina’s biological child. Harmony Miller (Inga Cadranel) recently brought up what a gift Willow was when she came into her life. Her strange wording seemed like a clue that Willow was perhaps stolen from Nina and illegally adopted once upon a time.

However, Nina herself pointed out that her feud with Willow is in the past. There’s really no drama or shock value in this revelation at all. If General Hospital wants to surprise fans or offer anything interesting, they can’t just reveal Willow as Nina’s kid and have that be that. There’ll have to be some misdirection or some other messy situation.

That brings us to Nelle Benson Archer (Chloe Lanier). Why is Nelle suddenly back in Nina’s orbit and working at Crimson again? Nelle could’ve gotten a job anywhere, but GH writers chose to put her in this particular environment.

Carly was initially furious with Nina for hiring Nelle, but Nina explained that it was all part of her master plan. Nina intends to pretend she’s bonding with Nelle.

She’s going to let Nelle think they’re friends and ultimately rake her over the coals in court – at least that’s the plan. Something tells us that plan will change soon enough. Nina may end up turning against the Corinthos clan.

Carly brought up Nelle’s sob story and filled Nina in on how Jasper “Jax” Jacks (Ingo Rademacher) bought Nelle’s kidney for Josslyn Jacks (Eden McCoy). When Carly talked about how crazy Nelle was, Nina objected to her use of the word. Since Nina’s spent some time on the crazy side, maybe Nelle inherited that.

Earlier, Nelle was also trying to relate her bogus tale of Brad Cooper (Parry Shen) stealing her baby to Nina’s stolen child. There are still some signs that Nelle could Nina’s bio kid or possibly look like she is. Even if it doesn’t turn out to be true in the end, General Hospital could take this route for a while.

So how does Carly fit in all this? It was weird for Nina to trot out the necklace and make a big show about explaining everything to Carly. Will Carly ultimately realize Nelle is Nina’s bio daughter and keep it a secret?

It worth mentioning that Carly will indeed have a secret during the week of April 6-10. That secret will be exposed to someone, so it might tie in with all this daughter drama.

It’s easy to imagine Carly worrying that Nina would genuinely bond with Nelle just like she bonded with Sasha Gilmore (Sofia Mattsson). Nina’s desperate for a daughter, even one as ruthless and conniving as Nelle. If Carly were to keep the truth hidden from Nina, that’d be a surefire way to put Nina on Nelle’s side.

Wiley Quartermaine-Corinthos (Erik and Theo Olson) would also be Nina’s grandchild if this revelation panned out. It’d be an extra motivator for Nina to fight for keeping Nelle with Wiley and focus on family.

Nina tried to help Nelle once upon a time and might want to do it again. This plan to trash Nelle in court could turn into a plan to trash Michael Corinthos (Chad Duell) instead!

Of course, we should acknowledge that Nelle’s smart enough to fake this bio daughter connection and set Carly up to fall for it. This whole thing could be some twisted plan of hers. Regardless, something odd is brewing and GH fans will be eager to see what it is. We’ll give you updates as other news rolls in.