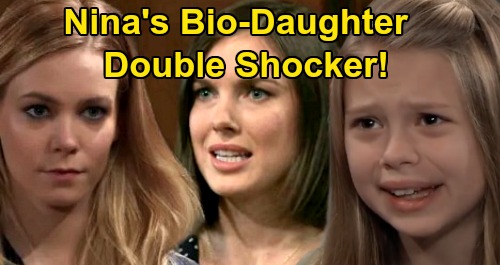 General Hospital (GH) spoilers tease that Charlotte Cassadine (Scarlett Fernandez) will take a page straight out of her father’s playbook. GH fans know Charlotte has been known to stir up trouble anyway, but she’ll become even more of a schemer in the coming weeks. Charlotte has a big plot coming up that could bring complications for several characters.

Valentin Cassadine (James Patrick Stuart) is a master manipulator who’s certainly been known to carry out his fair share of schemes. Let’s consider what bad habit Charlotte might pick up and how it could fit into the upcoming storyline. It’s always a good idea to speculate based on the facts and try to figure out where things are going.

For starters, this is clearly something important enough to be mentioned in General Hospital spoilers. Charlotte isn’t going to scheme for an extra pudding cup or plot to stay up an hour later. This goes beyond kid stuff. In other words, Charlotte’s going to do something conniving enough to prove she’s her father’s daughter.

GH fans can expect a truly calculated move that’ll eventually make trouble for Valentin. So what might that calculated move be? We should consider another potential clue based on the available info. General Hospital spoilers say Charlotte will hang out with Nina Reeves (Cynthia Watros) on April 1.

It looks like this Charlotte-Nina bonding trend will continue in future episodes, so that could be significant. Charlotte hasn’t been on the scene in a while, but the show’s suddenly putting her back on and having her spend time with Nina. It could be an indicator that Charlotte’s scheme will tie in with Nina, too.

It makes sense considering Valentin’s still in love with Nina and there’s really no place for Charlotte in an ELQ takeover plot. The Nina side of things seems like a far more reasonable way to take this. Of course, we also have to consider what Nina’s big story is right now. GH viewers are waiting to find out who Nina’s biological daughter is.

General Hospital spoilers say the origin of Nina’s necklace will be explained, but that doesn’t mean the truth will come out in Port Charles just yet. It simply means fans will know who Nina’s daughter is. Nina may not know the real story at first. Could that be thanks to a little scheming from Charlotte?

After all, that’d be the ultimate way for Charlotte to take a page out of her papa’s playbook. Valentin has duped Nina about her biological child before! Let’s say Charlotte figures out the true identity of Nina’s daughter. She might realize who has the necklace – whether that be Nelle Benson Archer (Chloe Lanier) or Willow Tait (Katelyn MacMullen).

As of right now, all the signs and insider hints point to Nelle being Nina’s daughter. Although Charlotte liked Nelle once upon a time, things can change. That may not be the case now that Charlotte’s not so innocent anymore. A schemer can spot a schemer, so Charlotte may see Nelle’s true colors.

Charlotte has also softened toward Willow and had a nice chat with her a while back. Willow even gave Charlotte an award at school, so they’re on good terms these days.

Since Nelle will cause more drama for Valentin soon, Charlotte might decide she’s not keen on having Nelle as a big sister of sorts. Nina may not be Charlotte’s stepmom now, but Charlotte still thinks of her as a mother figure.

Will Charlotte make Nina believe Willow is her daughter instead of Nelle? Since Harmony Miller (Inga Cadranel) is probably a goner due to all the Cyrus Renault (Jeff Kober) chaos, a box of Willow’s old things could easily surface after Harmony’s dead.

Could there be some opportunity for Charlotte to steal the necklace from Nelle and plant it so Willow looks like the real thing? If Nelle tried to object, who would believe her?

Valentin would probably prefer Willow as a backup daughter for Nina anyway, so there’s always the opportunity for more DNA test tampering. Regardless, Charlotte will prove she’s bad news with an explosive plot soon enough! We’ll give you updates as other GH details come in.

Do you think Charlotte’s scheme will involve more daughter deception for Nina? Is that how Charlotte will follow Valentin’s twisted example? CDL will have more hot General Hospital spoilers, news and updates, so be sure to stop by often.