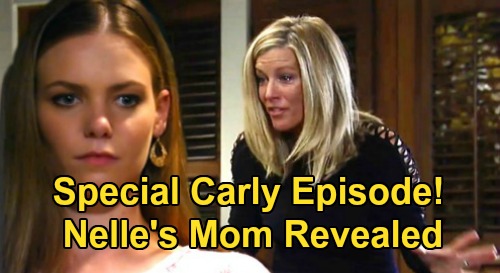 General Hospital (GH) spoilers tease that Carly Corinthos (Laura Wright) will be pushed to her breaking point. Naturally, Nelle Benson Archer (Chloe Lanier) will be the one doing the pushing! To be fair, Carly always lets Nelle get under her skin and then pushes Nelle’s buttons in return. These two are stuck in an endless cycle of vicious, manipulative moves.

Nelle was selfish and made this about her instead of Wiley, but she still has parental rights here. Carly’s choice was awfully extreme and is sure to make the whole family look terrible in court. As Nelle’s threats rev up in the coming weeks, Carly will be stressed to the max. It’ll all build to major concerns and a special episode that focuses on Carly, which will air on April 7.

General Hospital spoilers say fans will learn some things they didn’t know before in this Carly-centric show. Carly’s past will be explored, so there’ll be some buried surprises in store. GH viewers can also expect an intense look at Carly and Nelle’s complex relationship. There could be a few shockers in that department as well – perhaps some that connect to another storyline.

In this Carly special, Nina Reeves (Cynthia Watros) will try to get through to Nelle. Maybe Nina will be trying to talk Nelle into making peace with Carly and Michael. Of course, there’s no chance of that happening. Nelle will stand her ground to the bitter end and refuse to let Carly emerge victorious.

We should mention that Nelle’s father, Frank Benson, was Carly’s adoptive father. It might be significant that Nina’s in this Carly episode with Nelle. Since GH is going back in time and clearing up some Carly details, there may also be some Nelle details through that Frank connection.

In Soap Opera Digest’s spring preview, General Hospital Co-Head Writer Chris Van Etten made an intriguing statement. On the topic of Nina’s biological daughter, Van Etten insisted that “the origin of Nina’s necklace will be revealed.” Focusing on the origin seemingly points to flashbacks – and there will indeed be newly created flashbacks in this Carly episode.

Will we see a young Nelle with the necklace at some point? Current actors on the show will play younger versions of other characters in these flashbacks. Our money’s on Eden McCoy (Josslyn Jacks) as a young Carly. If they need an itty-bitty Nelle for some necklace scenes, Jophielle Love (Violet Barnes) would be a great fit.

Frank obviously never loved Nelle like he should. Not only did Frank sell Nelle’s kidney to Jasper “Jax” Jacks (Ingo Rademacher), he lied to Nelle about Carly stiffing him on the money.

In reality, Frank just blew through all the cash and fueled a grudge against Carly that continues to this day. It makes you wonder if Frank was really even Nelle’s father since he treated her like garbage.

This sounds like the kind of thing that could set up Nelle being Nina’s biological child. Will Carly’s special tie in with that revelation? Regardless, General Hospital spoilers say some bombshells are brewing. We’ll pass along updates as other GH news rolls in.

Are you curious about this special Carly episode? Some huge twists are on the way! CDL’s your hotspot for General Hospital spoilers, news and updates.