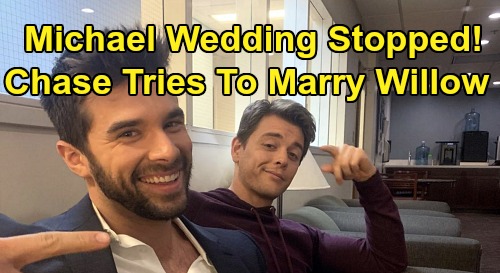 General Hospital (GH) spoilers tease that Harrison Chase (Josh Swickard) may resort to another crazy, drastic move. GH fans know Chase was willing to go to extremes in his recent plot with Sasha Gilmore (Sofia Mattsson). They pretended they were having an affair to push Michael Corinthos (Chad Duell) and Willow Tait (Katelyn MacMullen) into marriage.

Unfortunately, that plan has caused a whole lot of heartache! Hamilton Finn (Michael Easton) urged Chase to come clean and win Willow back while he still could. Chase seemingly considered the idea when Willow returned to the apartment for her stuff.

However, Chase ultimately stayed tight-lipped about his fake betrayal and continued to wallow in misery.

It’s clear that Chase is having a hard time with this secret. Not only has Chase lost Willow, he hates knowing how much he hurt her. Willow refused to even let Chase offer a proper apology. She’s faced so much pain in her lifetime and can’t open herself up to any more of it right now.

All of this is slowly chipping away at Chase’s confidence. Chase keeps waiting to feel like this was all worth it, but that feeling hasn’t come yet. Will it ever really come? Probably not – and that’s why the “Millow” nuptials could be in jeopardy!

General Hospital spoilers say Michael will make a life-changing choice during the week of May 4-8. That’ll most likely be offering Willow a formal proposal. Willow assured Michael that if marrying him was the only way to beat Nelle Benson Archer (Chloe Lanier), she would do it. Despite his previous claims, Michael may just come right out this seems to be the only way.

During the week of May 11-15, more General Hospital spoilers that point to this Michael and Willow wedding moving forward. Willow will mull over her future before receiving Carly Corinthos’ (Laura Wright) admiration. Then, Michael will be surrounded by loved ones.

If we translate all that, it seemingly adds up to Willow deciding she’ll be Michael’s bride and Carly admiring her for it. The loved ones gathering…well, it’s a wedding! That’s what you do when two people are about to tie the knot.

Here’s where Chase’s bold move may come in. The same day Michael’s surrounded by loved ones, Mac Scorpio (Tristan Rogers) will pull Chase aside. Later, Chase will get an earful from Carly. It certainly sounds like Chase will try to stop this wedding, but that may not be the extent of his shocking stunt.

Another hint came from an Instagram photo Josh Swickard posted back on March 10. Swickard and Chad Duell had been on set wearing what appears to be wedding attire. “This is what happens when we don’t call each other before work to make sure we don’t wear the same outfit… dangit Chad,” Swickard said.

Since it doesn’t look like Chase will confess before the ceremony, there’s probably no danger of him being the best man. Michael hates Chase’s guts over the fake affair.

That means Chase will likely show up and insist Willow should marry him instead! This may bring a dramatic confession and plea for forgiveness, but will it be too little, too late?

Since it sounds like Mac’s dragging Chase out and Carly’s berating him soon after, Chase may get rejected. Willow may turn down Chase’s groom swap offer and stick to her plan of marrying Michael for Wiley Quartermaine-Corinthos’ (Erik and Theo Olson) sake.