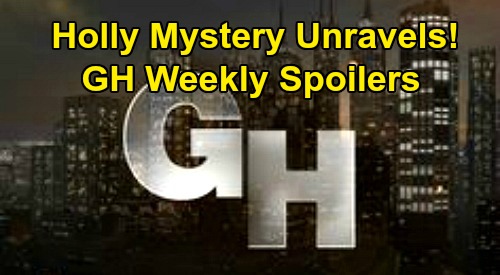 General Hospital (GH) spoilers for the week of May 4-8 tease that we’ll see some showdowns and shockers. First, Julian Jerome (William deVry) will once again blow up at Neil Byrne (Joe Flanigan). It’s clear that Julian’s got some anger issues he needs to work on!

As for Brando Corbin (Johnny Wactor), he’ll also be in angry mode. Brando will play the blame game, which will involve pointing the finger at Sam McCall (Kelly Monaco). Molly Lansing-Davis (Haley Pullos) will also express her annoyance, so she may feel like these two are creating more problems.

Molly’s got enough to deal with since she’s trying to keep TJ Ashford (Tajh Bellow) in the dark on her hookup with Brando. It sounds like there’ll be another close call, but Molly will do her best to keep her relationship on solid ground.

Speaking of keeping relationships on solid ground, Nikolas Cassadine (Marcus Coloma) will reevaluate his marriage. Nik’s miserable with Ava Jerome (Maura West), so is all this really worth it? Although Nikolas won’t decide to divorce Ava, she may realize he’s considering it.

Ava will plan a big bash to celebrate her portrait unveiling, but Nik’s attitude could rain on her parade. He already left her disheartened by poking fun at the portrait and pointing out that his family wouldn’t attend her ridiculous party. Nik’s words clearly hurt Ava more than he knows – perhaps even more than she knows!

Ava seems to be developing genuine feelings, but what about Nikolas? Maybe Nikolas will realize he feels the same way in time, but he’ll continue to hurt Ava for now.

General Hospital spoilers say Ava will get some comfort from Franco Baldwin (Roger Howarth) in the week ahead. That should renew Nik’s desire to push Ava in Franco’s direction and get this cheating clause activated.

However, Elizabeth Baldwin (Rebecca Herbst) will keep her guard up. Franco and Liz may not be fooled by any scheming the Dark Prince and his wife do. While Ava and Nik’s drama heats up, Nelle Benson Archer (Chloe Lanier) will prepare for battle.

General Hospital spoilers say Nelle will have a strategy session with Martin Gray (Michael E. Knight) as they gear up for the custody hearing.

GH viewers can expect Nelle to work out a new and presumably twisted plan – one that’ll hopefully give her an advantage in court. Nelle will deliver a proposition to someone later. There’s a good chance that someone will be Valentin Cassadine (James Patrick Stuart), so we’ll see how he responds to Nelle’s intriguing offer.

As for Michael Corinthos (Chad Duell) and Willow Tait (Katelyn MacMullen), they’ll be broken hearts that come together for Wiley Quartermaine-Corinthos’ (Erik and Theo Olson) sake. General Hospital spoilers say Michael will make a significant choice. It’ll change Michael’s life, so this has to be about proposing to Willow and getting this marriage show on the road.

Over with Nina Reeves (Cynthia Watros) and Carly Corinthos (Laura Wright), they’ll have a shouting match. As Nina continues to bond with her new assistant, she’s bound to see more of Nelle’s good qualities. Carly doesn’t think Nelle even has good qualities, so she may lash out at Nina for letting Nelle pull the wool over her eyes.

Nina was supposed to help Michael and the rest of the Corinthos clan, so Carly may remind her of that. In the meantime, Nelle will further complicate things by pushing Nina to do her a favor. It sounds like Nina could find herself in quite a bind once she eventually takes the stand.

Finally, General Hospital spoilers say Anna Devane (Finola Hughes) will review a crucial WSB file. Will this involve unraveling the mystery of Holly Sutton’s (Emma Samms) – or faked death as the case may be? There’s much more to the story when it comes to Holly, but finding answers could mean Anna will also expose devious Peter August (Wes Ramsey).

We’ll provide updates as other GH news pops up. General Hospital fans will want to stay tuned for all this excitement and more! CDL’s a great place to visit for sizzling General Hospital spoilers, updates and news posts.