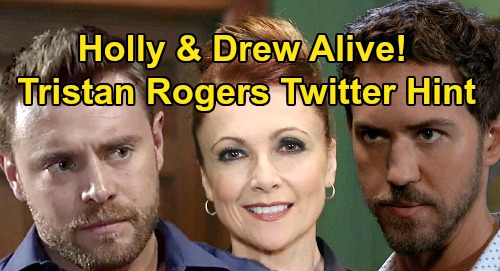 Soon after, Robert received a horrifying phone call. After hurrying back to Anna Devane’s (Finola Hughes) place, Robert revealed that Holly Sutton (Emma Samms) was dead. Of course, Holly was a former flame that Robert cared deeply for. Robert sought comfort from Anna as he struggled to process this crushing blow.

Based on the timing, this is almost certainly Peter’s doing. However, there’s one question on most GH fans’ minds now: Is Holly really dead? It’s an important one since the answer could seal Peter’s fate.

How can GH possibly redeem Peter if he keeps sinking lower and lower? If Peter actually ordered a hit on Holly, there may be no way Peter can survive – let alone be redeemed! That’s especially true since Peter already ordered Drew Cain’s (Billy Miller) murder.

On Twitter, viewers have been speaking out about Holly’s offscreen fate. “Why is Holly Dead. Noooo not my Holly,” one General Hospital fan tweeted. Another fan said, “I have waited for years for them to get together again.

This was quite a shock. How could they do this? It really upset me…Now they take away a dream I had that someday they would get together again. I can’t believe it.”

Since Tristan Rogers was tagged in the tweet, he decided to chime in – and his response offered some hope for the future. “Don’t jump to conclusions,” Rogers tweeted. “This story was written awhile ago before we had COVID-19. Now it’s a whole new game.”

That doesn’t necessarily mean Holly survived, but it does suggest there could be more to the story. That leaves the door open for there to be more to the story with Drew, too. It probably all depends on whether or not they want to keep Peter alive or not!

Holly’s portrayer revealed that she was recovering from COVID-19 aka the coronavirus back in late March. Emma Samms couldn’t get a test to confirm it, but her doctor felt certain that was the diagnosis.

GH writers may not have chosen to kill Holly off if they’d known that in advance – but as Rogers pointed out, the story was already written and filmed.

That could be part of what Rogers is referring to as well, but it offers hope for Holly either way. Even if the plan was for Holly to stay dead, it could be something General Hospital writers choose to undo. The same goes for Drew if they want Peter to survive at the end of this arc.

Don’t jump to conclusions. This story was written awhile ago before we had COVID-19. Now it’s a whole new game.