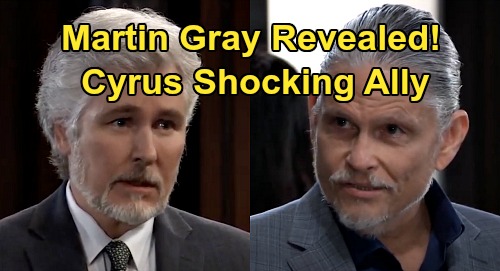 General Hospital (GH) spoilers tease that Cyrus Renault (Jeff Kober) could have another shocking ally. During a conversation with Mac Scorpio (John J. York), TJ Ashford (Tajh Bellow) recalled some details that could lead back to his kidnapper. GH fans know Cyrus orchestrated that abduction plot, but he certainly had some help.

TJ remembered how one of the men holding him brought him smoothies. Although this man never spoke to TJ directly, he had a distinctive ringtone: My Old Kentucky Home. This mystery captor had a southern accent when TJ overheard him on the phone. TJ also mentioned this guy had taps on his shoes, so these are some intriguing tidbits.

With all that in mind, General Hospital has laid the groundwork for a big reveal. There’ll surely be some moment where viewers hear this ringtone and see someone answer the phone. The man who walks away will inevitably have those taps TJ brought up.

It wouldn’t be much of a big reveal unless we recognized this guy, so who is it? Martin Gray (Michael E. Knight) might be the perfect fit! He has a southern accent and seems like a softie that’d be bringing TJ smoothies.

It’s easy to imagine Martin having My Old Kentucky Home as a ringtone, so that may be where GH is headed with this. Martin could easily be tangled up in this Cyrus mess.

Since Martin works for Valentin Cassadine (James Patrick Stuart) and is serving as Nelle Benson Archer’s (Chloe Lanier) lawyer as well, there are some interesting possibilities here. All of these characters are pretty connected right now. Nelle’s also battling the Corinthos clan like Cyrus, so there are a lot of ways for storylines to collide.

It makes sense for General Hospital to do another stunning ally reveal like they did with Harmony Miller (Inga Cadranel). They want to pull as many people into this mayhem as possible – especially as the drama heats up. Martin may be the next Cyrus associate to shake things up.

Since Nelle is Nina’s biological daughter, Nina might freak if Nelle gets dragged into danger down the road. That mother-daughter revelation will change everything and leave Nina protective of Nelle.

Cyrus could also pose a threat to Nina’s grandson, Wiley Quartermaine-Corinthos (Erik and Theo Olson) – both through Harmony and this battle with Sonny Corinthos (Maurice Benard).

This is an easy opportunity for Nina to get on Nelle’s side, especially if Nina can pry details out of Valentin. If Martin is indeed working for Cyrus, you can bet that’ll cause more problems! We’ll deliver updates as other GH news pops up.