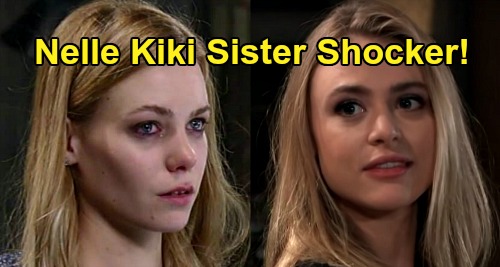 General Hospital (GH) spoilers tease that Nelle Benson Archer (Chloe Lanier) may soon be in for a big surprise. As GH viewers know, Nelle was recently working in Nina Reeves’ (Cynthia Watros) office when she nearly stumbled upon the half-heart pendant sitting in the open box on Nina’s desk. It was a near-miss, though, as Nelle fumbled around on the desk and didn’t see what was inside the box.

But at some point, Nelle is probably going to come across that pendant, since that’s really the only feasible way at this point that Nelle will ever know that she’s actually Nina’s daughter.

But we have to wonder exactly what Nelle will think when she’s faced with the possibility that her mother is Nina and that she actually has the family she’s always dreamed of.

Nelle recently told Carly Corinthos (Laura Wright) that she was bitter because if Carly had stayed with her and Frank Benson (who was played in flashbacks by James Patrick Stuart), then the two of them could have been sisters. Nelle seems to desperately want family, and especially a sister.

Well, when it does come out that Nelle is Nina’s and Silas Clay’s (Michael Easton) daughter, Nelle will realize that she did indeed have a sister – her half-sister, Kiki Jerome (Haley Erin), who is now deceased.

That’s probably going to be pretty tough for Nelle to take, for a couple of reasons. Obviously, Nelle will probably wish that she’d have been able to know Kiki and she’ll be said that Kiki’s gone forever.

But there’s another interesting factor here, and that’s the matter of how Kiki died. GH viewers will remember that Nelle befriended Ryan Chamberlain (Jon Lindstrom) in Pentonville, and that she agreed to be Ryan’s secret source of information for Ava Jerome (Maura West) on the outside once she was released from prison. This was in exchange for Ryan helping Nelle get to General Hospital by stabbing her in the prison infirmary.

Ryan and Nelle seemed to have a good rapport from the beginning, with Nelle even being kind of an admirer of Ryan. But we have to wonder what Nelle is going to think when she realizes that Ryan murdered her half-sister Kiki!

Nelle might feel terrible about befriending Ryan after learning that he killed her chances of getting to know her own sister.

It will be interesting to see how Nelle deals with the knowledge that she befriended her sister’s killer. It will almost certainly bring Nelle some angst, and perhaps even some serious guilt – that is, if Nelle is capable of feeling guilt! We could see a genuine freak out on Nelle’s part – could it possibly be the start of Nelle’s big turnaround?

What’s your take? Do you think that Nelle will be horrified when she learns that her good friend Ryan murdered her own sister? Keep watching General Hospital, and we’ll keep you informed about all the latest spoilers and updates. Remember, CDL is your place for everything GH!

“You start by getting rid of Jason Morgan.” #GH pic.twitter.com/wzFsEuqLyG