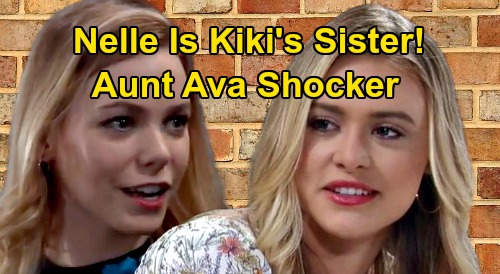 Everything we’re hearing from insiders backs up Nelle as the real deal. There’s also a Carly-centric episode on the way, which will expose a bombshell related to Carly and Nelle’s history. General Hospital will probably reveal Nelle as the original owner of the other necklace half – although it may no longer be in her hands thanks to Carly.

What happens once this Nina-Nelle bomb shakes things up? It could take a while before the truth to become public knowledge, but GH should get there sooner or later. This news will affect more that just Nelle, Nina, Carly and the Corinthos family.

There’s also Ava Jerome (Maura West) to consider since Nelle will be connected to Ava’s dead daughter, Kiki Jerome (Hayley Erin). If Nelle is indeed Nina’s bio daughter as expected, that would make her Kiki’s half-sister.

General Hospital viewers will recall that the father of Nina’s child was Silas Clay (Michael Easton), who was also Kiki’s biological father. Once Ava realizes she has another link to Kiki in this world, she may latch on to it. This could be an opportunity for Nelle to gain another ally if she plays this correctly.

Both Ava and Nina were somewhat close to Nelle once upon a time. They both hired Nelle and took her under their wings when no one else would. Nelle can work all the right angles and pull them back into her twisted web.

Since Nina’s wanted her daughter for so long, it shouldn’t be too hard for Nelle to reel her in. Nelle can do the same thing by asking Ava about Kiki and wishing she could’ve gotten to know her half-sister better.

Although Nelle will already have a great ally in Nina by the end of all this, she may want sneaky Aunt Ava on her side, too. It couldn’t hurt, especially since Ava now has access to the Cassadine fortune and plenty of resources. Nelle’s looking for all the help she can get to secure custody of Wiley Quartermaine-Corinthos (Erik and Theo Olson).

Michael Corinthos (Chad Duell) has not one but two wealthy, powerful families behind him: the Corinthos clan and the Quartermaines. Nelle needs to boost her standing as someone with support behind her, too. Nina and Ava could pitch in with that, so it’ll be interesting to see how Michael handles all the curveballs ahead.

As other GH details become available, we’ll be sure to deliver updates. Do you think Nelle and Kiki’s half-sister connection will tug at Ava’s heartstrings? Will Ava become Nelle’s ally along with Nina? Don’t forget to stop by again soon for other hot General Hospital spoilers, updates and news.