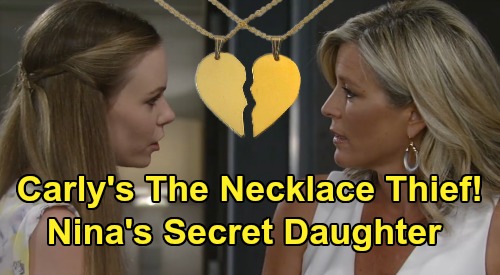 General Hospital (GH) spoilers tease that Carly Corinthos (Laura Wright) is keeping a huge secret, which is set to be revealed soon. On April 7, GH will show us some of the events leading up to 1996 – when Carly first surfaced in Port Charles. General Hospital will go back to Carly’s younger years and highlight some complicated relationships in her life.

Carly’s adoptive parents, Frank and Virginia Benson, will be part of the story that’s told. General Hospital spoilers say we’ll see how unloved and unwanted Carly felt. Her relationship with Frank was particularly contentious and cold. Carly felt like Frank didn’t care about her at all – and that’s true based on everything we know about Frank so far.

Since Carly felt so unwanted, it’ll be hard for her to see Frank with a child he’s actually caring for. Of course, GH viewers know Frank was a crummy father to Nelle, too. Frank sold Nelle’s kidney and then lied to her about Carly not paying him as promised.

It was really Jasper “Jax” Jacks (Ingo Rademacher) who bought Joss’ kidney, so Nelle’s plan to take down Carly was pointless. That was all Frank’s fault.

General Hospital will apparently establish some resentment in these flashback scenes with young Carly and young Nelle. Now that we’ve set the stage, we have to consider what this secret of Carly’s might be. We should also mull over the details of Carly’s cover-up.

Is this something Carly’s been keeping under wraps for many years? Is it a long-held secret or perhaps something long-forgotten instead? Knowing Carly, we wouldn’t put it past her to be keeping some major secret all this time. It could also be something that’s just now clicking into place.

Regardless, it seems likely this involves the necklace origin story. Nina Reeves’ (Cynthia Watros) biological daughter is almost certainly Nelle, so how’s GH going to reveal that? It sounds like they may do it though a flashback bombshell.

Since young Carly will seemingly be bitter toward Nelle in these flashbacks, will she steal young Nelle’s half-heart pendant necklace? Nina thinks her bio daughter must have it, but what if it’s in Carly’s possession?

When Nina showed Carly the necklace and explained, it’s possible Carly got a clue – or she may already know Nelle is Nina’s bio kid. Whether things are falling into place for Carly now or she’s known all along, that may be Carly’s big secret.

Carly would certainly have no motive to expose this information. She wouldn’t want to give Nelle family ties in Port Charles, especially when Nina’s so eager to have a daughter to bond with.

Regardless, the clues are starting to add up – and they potentially point to Carly as a necklace thief! We’ll keep you posted as other GH news and updates roll in. General Hospital spoilers say some wild twists are brewing, so don’t miss all the action.

Do you think Carly stole Nelle’s half-heart pendant necklace? Is Carly sitting on the truth about Nina’s biological daughter? Don’t forget to stop by CDL again soon for other fantastic General Hospital spoilers, updates and news.