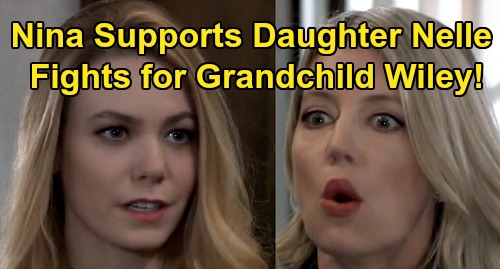 Let’s consider some possible hints. For starters, GH insiders insist that one storyline has deviated from the original plan. There’s no confirmation on which story that is, but it could easily be this one.

It’s clear that General Hospital writers were initially setting up Willow Tait (Katelyn MacMullen) to be Nina’s biological daughter, but Nelle would be the far more dramatic option.

Many GH viewers have complained about Willow and Sasha Gilmore (Sofia Mattsson) essentially being the same character. Sasha may have duped Nina, but she didn’t do it maliciously.

Now just imagine if Nina finds out her bio daughter is someone not so sweet – someone unhinged and capable of murder! It’s complicated if Nina finds out Nelle is her flesh and blood, and complications aren’t what Michael needs. Carly may realize that and hide the truth about that half-heart pendant Nina was so eager to show her.

Of course, that would be a horrible idea since Nina would inevitably find out. Nina’s already been deceived about her bio daughter through Sasha and Valentin Cassadine’s (James Patrick Stuart) scam. She’ll be absolutely livid if she’s once again misled about her own child – this time thanks to Carly’s cover-up.

Nina assured Carly that she would pretend to be pals with Nelle. The plan is to let Nelle think she’s winning, but what if Nelle actually wins? Carly’s going to look like the bad one in all of this if she keeps Nelle’s bio daughter status a secret.

Nelle can use that to her advantage and argue that Wiley – Nina’s grandchild if all this pans out – should be kept as far away from the Corinthos family as possible.

General Hospital fans know Nina talked about getting up on the stand and trashing Nelle’s character in court. Nina suggested she’s putting herself in the prime position to do that as Nelle’s employer.

Instead, Nina may deliver a horrible blow to Michael’s custody case. What happens if Nina reveals Carly’s potential deception? Nina could tell the judge that Carly lied to her about Nelle being her bio kid. She could paint Carly and Michael as people who clearly want to keep mothers from their children.

When you throw in Nelle’s bogus story about Brad Cooper (Parry Shen) stealing her baby, she could look pretty sympathetic here. Nina’s wanted a daughter for so long that she may not care about Nelle’s past mistakes.

They were close once upon a time and could get close again. Nelle would certainly milk a connection like this for all it’s worth! General Hospital spoilers say some big twists are brewing, so we’ll see if Nina becomes Nelle’s ally and Carly’s enemy.

As other news emerges, be sure to check back for GH updates. Do you think Nina will end up supporting Nelle in this custody battle? Will Michael lose thanks to Nina’s crushing court blow? CDL’s the place to be for thrilling General Hospital spoilers, updates and news.