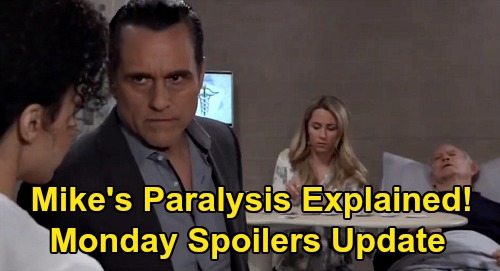 General Hospital (GH) spoilers update for Monday, March 30, teases that Ava Jerome (Maura West) will worry about Trina Robinson (Sydney Mikayla). At the gallery, Ava will wonder if someone’s trying to get Trina to do something she doesn’t want to do. Trina will insist it’s nothing like that, but she’ll mention that she’s going to meet Cameron Webber (William Lipton) – and she may have messed everything up.

Ava will think she’s got a lot of experience in this department, so she’ll push Trina to spill. That’ll lead to the story of Cam’s feelings for Josslyn Jacks (Eden McCoy) and how Joss will feel the same way once she’s in the loop. Trina will insist that’s great, but she’ll reflect on losing her dad and how Cam is the only one who understands what she’s going through.

When Trina admits she got confused, Ava will wonder if Trina and Cam kissed. General Hospital spoilers say Trina will likely come clean and ask for guidance. Something tells us Portia Robinson (Brook Kerr) won’t appreciate that if she gets updates. Portia likes to be the only one dishing out advice to her daughter!

Next, Cam will share his side of the story with Franco Baldwin (Roger Howarth). After Cameron fills Franco in on what happened, Cam will fret about making things worse with that kiss. Since Cameron won’t know what to do, Franco will do his best to steer him in the right direction.

Other General Hospital spoilers say Jason Morgan (Steve Burton) will keep Jordan Ashford’s (Briana Nicole Henry) eye on the prize. As hard as it’ll be to throw her old team under the bus, Jordan has to do it for TJ Ashford’s (Tajh Bellow) sake. Unfortunately, Jason’s reassurance won’t do much to relieve Jordan’s guilt.

Jordan will move forward with her plan to rat out the rest of her deceased task force, including Marcus Taggert (Real Andrews). As a result, Curtis Ashford (Donnell Turner) will think he should do the right thing and at least warn Portia.

After Curtis admits he told Jordan about their history together and his suspicions about Trina, it’ll be time to drop the bomb. Curtis will explain that Taggert helped the others frame Cyrus Renault (Jeff Kober), but he’ll naturally leave Jordan out of the story.

GH spoilers say Curtis will share the phony version, which is that Jordan discovered new evidence of this. Portia’s lack of reaction will be rather troubling to Curtis, who’ll suspect she already knew about the setup.

Curtis will realize Portia may also know Jordan was in on the scheme. That’ll leave Curtis with growing fears about Jordan landing behind bars if this gets out. Jordan had better stay on Portia’s good side or else she could wind up in the slammer!

It looks like Carly will forge Nelle’s signature and happily deliver those forms to Monica Quartermaine (Leslie Charleson). General Hospital spoilers say Wiley will apparently be prepped for surgery ASAP.

While Sasha Gilmore (Sofia Mattsson) waits with Carly and Michael Corinthos (Chad Duell), she’ll ponder Nelle’s strange change of heart. Michael may back Sasha up on how weird and abrupt it was. He may ask how Carly of all people got Nelle’s signature.

Carly will likely stay tight-lipped for now, which should give Monica and her team a chance to pull this off. GH spoilers say Monica will eventually have good news to report, so Wiley should come through the surgery just fine. Even so, Nelle will be livid with Carly for leaving her stranded on the roof and misleading the doctors about her approval.

Nelle will absolutely try to exploit this situation in court. Carly won’t regret what she did since Wiley’s health is what matters most, but she may pay the price later! In Mike Corbin’s (Max Gail) room, Sonny Corinthos (Maurice Benard) will fret over how disoriented his dad is. Mike won’t want to get out of bed, so Sonny will ask Portia what the problem is.

Portia will confess they couldn’t find anything that would physically prevent Mike from walking. The doc will believe Mike’s fall made him too terrified to move around. Elizabeth Baldwin (Rebecca Herbst) will also weigh in at some point, so Sonny will have a lot to mull over.

As Joss hangs out with Mike and offers comfort, Sonny will try to make peace with Mike’s looming death. If Mike won’t get out of bed and keep up his daily routine, he’ll inevitably die sooner.

Across town, Molly Lansing-Davis (Haley Pullos) will hear about Sam McCall’s (Kelly Monaco) fight with their mom. Sam will feel terrible about how unfair she was to Alexis Davis (Nancy Lee Grahn).

General Hospital fans know Sam said some nasty things, but she was just mad at the situation and unloaded on Alexis because of it. Molly will likely assure Sam that she can patch things up with Alexis, but the topic of missing TJ will bring more concerns. The longer TJ’s gone, the more worried Molly’s going to be.

As for Alexis, she could be in more trouble than Sam and Molly know. Alexis took a drink and blew her sobriety, so she’s in a dark place right now. Despite Julian Jerome’s (William deVry) attempt to help, Alexis’ struggles may get worse before they get better.