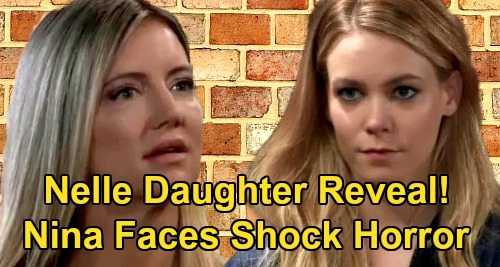 General Hospital (GH) spoilers tease that Nina Reeves (Cynthia Watros) will ultimately get the shock of her life. GH fans know Nina has been desperate for a child for what feels like forever. Valentin Cassadine (James Patrick Stuart) tried to make Nina’s dream come true – at least in a way.

Through plenty of bogus evidence and test tampering, Valentin duped Nina into thinking Sasha Gilmore (Sofia Mattsson) was her biological daughter. Since Sasha wasn’t the real deal, that means Nina’s true daughter is still out there. In fact, she’s right under Nina’s nose!

Based on how all the clues are adding up and what we’re hearing from GH insiders, it looks like Nelle Benson Archer (Chloe Lanier) is indeed Nina’s long-lost child. There’ll undoubtedly be some crazy story to explain how it all went down, but we want to focus on the aftermath of the secret exposure.

This General Hospital shocker has to be revealed – and you can bet it’ll throw Nina for a loop! It’ll be interesting to see the route GH takes here. Will Nelle find out first and use it to her advantage?

Will Nina get updates and potentially hide the truth for a while? The latter might be a good way to go since Nina may eventually face suspicions.

Carly Corinthos (Laura Wright) either already knows or will soon know more than she’s letting on. Perhaps Nina will confront Carly at some point, which could force Carly to drop the Nelle daughter bomb.

Naturally, Carly would probably want Nina to keep that news to herself. She might argue that Nina would be better off with no daughter at all!

Nina will have a lot to wrap her head around, especially after going from the perfect “daughter” in Sasha to the worst one possible in Nelle. There’s a good chance Nina will be horrified initially, but she may come to blame herself for how Nelle turned out.

It seems likely Nina will believe she can “fix” Nelle with a mother’s love – the kind of love Nelle should’ve had all along. However, Nelle’s issues seem to run deeper than lack of love. Nina could set herself up for disaster if she gets caught up in their mother-daughter connection!