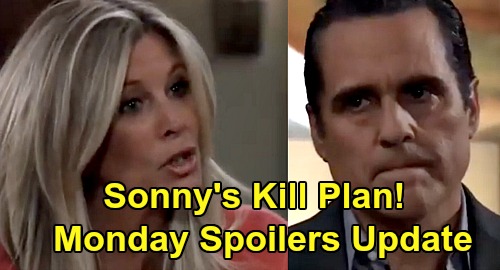 General Hospital (GH) spoilers update for Monday, April 6, teases that Laura Collins (Genie Francis) and Kevin Collins’ (Jon Lindstrom) will face a shocker. GH fans know they hatched a plan to have Cyrus Renault (Jeff Kober) transferred to Ferncliff, but Robert Scorpio (Tristan Rogers) thought that plot was destined to flop. It would seem like nothing more than a ploy to keep Cyrus locked away.

Of course, that’s exactly what it is! Laura doesn’t want Cyrus running amok in Port Charles, so she’s desperate for a way to avoid that. General Hospital spoilers say Laura will work on another strategy in Monday’s episode.

Kevin and Laura will be hopeful, but Robert will soon deliver some bad news. He’ll admit that Cyrus has a connection and was able to block their last-ditch effort.

Meanwhile, Cyrus will gloat as he tells Jordan Ashford (Briana Nicole Henry) it pays to have friends in high places. Jordan will hate being under Cyrus’ control like this, but she has to do whatever it takes to ensure TJ Ashford’s (Tajh Bellow) survival. Once Cyrus’ freedom is a done deal, Jordan will demand the safe return of her son.

However, Cyrus will point out that he’s not out yet. Since Cyrus can’t trust Jordan to keep her end of the bargain, it looks like he’ll want to be truly free before he hands over TJ.

Cyrus has put a lot of work into this scheme, so he can’t afford to blow it now. General Hospital spoilers suggest Cyrus will indeed score his freedom, which will lead to TJ’s release as well.

Naturally, Cyrus isn’t going to just ride off into the sunset peacefully. He’s bound to cause trouble in town just like Laura fears. Carly Corinthos (Laura Wright) will also battle concerns, so she’ll address the topic with Sonny.

It seems Carly will want to know how Sonny intends to handle Cyrus. The goal is killing Sonny’s latest enemy, but he’ll need to make sure every single step goes according to plan.

If anything goes wrong, Sonny could be putting his loved ones in even more danger. Cyrus is certainly the kind of man who retaliates, so Sonny will have to proceed with caution.

Jason Morgan (Steve Burton) will have that same mindset as he talks to Sam McCall (Kelly Monaco) on Monday. They’ve been discussing how risky it is to keep up their secret meetings, but Sam’s hesitant to let go.

Jason, on the other hand, is being a bit more levelheaded. If they have to wait to be together, then they have to wait. Sam can’t land herself back at Pentonville and get separated from her kids again. Furthermore, Jason’s too close to this Cyrus situation, so it’s best to avoid each other for the time being.

Sam may reluctantly cave in, but General Hospital spoilers say Jason will steal moments with her in the coming weeks anyway. There’s a strong connection between Jason and Sam that makes it difficult to stay away!

Speaking of staying away, it seems that’s what Cameron Webber (William Lipton) will think is best. Trina Robinson (Sydney Mikayla) is dealing with a lot and could perhaps use some space.

Once Cam explains how Marcus Taggert’s (Real Andrews) reputation is being tarnished, Josslyn Jacks’ (Eden McCoy) heart will break for Trina. This is only piling on more devastation, so Joss will want to help somehow. Friendship is important to Josslyn, so she’ll want to be there for Trina in her time of need.

Other General Hospital spoilers say Trina will pay Jordan a visit at home, but Jordan won’t be around. Instead, Curtis Ashford (Donnell Turner) will be the one who faces another angry outburst. It’s clear that Trina’s had it with Jordan, Curtis and anyone else who’s willing to add to her misery right now.

Next, Ava Jerome (Maura West) will offer Nikolas Cassadine (Marcus Coloma) a reminder. After pointing out that they’re family, Ava will contend that they should act like it. This marriage may be a sham, but Ava and Nik have agreed to sell it to the public as a real one. It sounds like Ava will push Nikolas to work a little harder on that.

General Hospital spoilers say Nikolas will worry about this whole marriage predicament. Could it have ramifications that Nik didn’t expect? Nikolas will ponder that question as he deals with his nerves in Monday’s GH episode.

As for Ava, she’ll advise Nina Reeves (Cynthia Watros) to be careful. Ava and Nina aren’t exactly besties, but they’ve reached an understanding and are in a better place these days.

Since Nina recently hired Nelle Benson Archer (Chloe Lanier) at Crimson, Ava’s warning will probably be about Nelle’s tricks. Once Ava gets updates on Nina’s scheme, she may suggest it’s a dangerous one.

When it comes to Nelle, it’s easy to think you’re in the driver’s seat only to have Nelle yank away the wheel. Nelle’s manipulative in every way possible, so Ava won’t think Nina should get too confident. It’s wise for Nina to stay on guard with Nelle in her orbit! CDL will have all the hottest General Hospital spoilers and news, so don’t forget to pop in regularly for updates.